A new reason to eat organic: a diverse microbiome 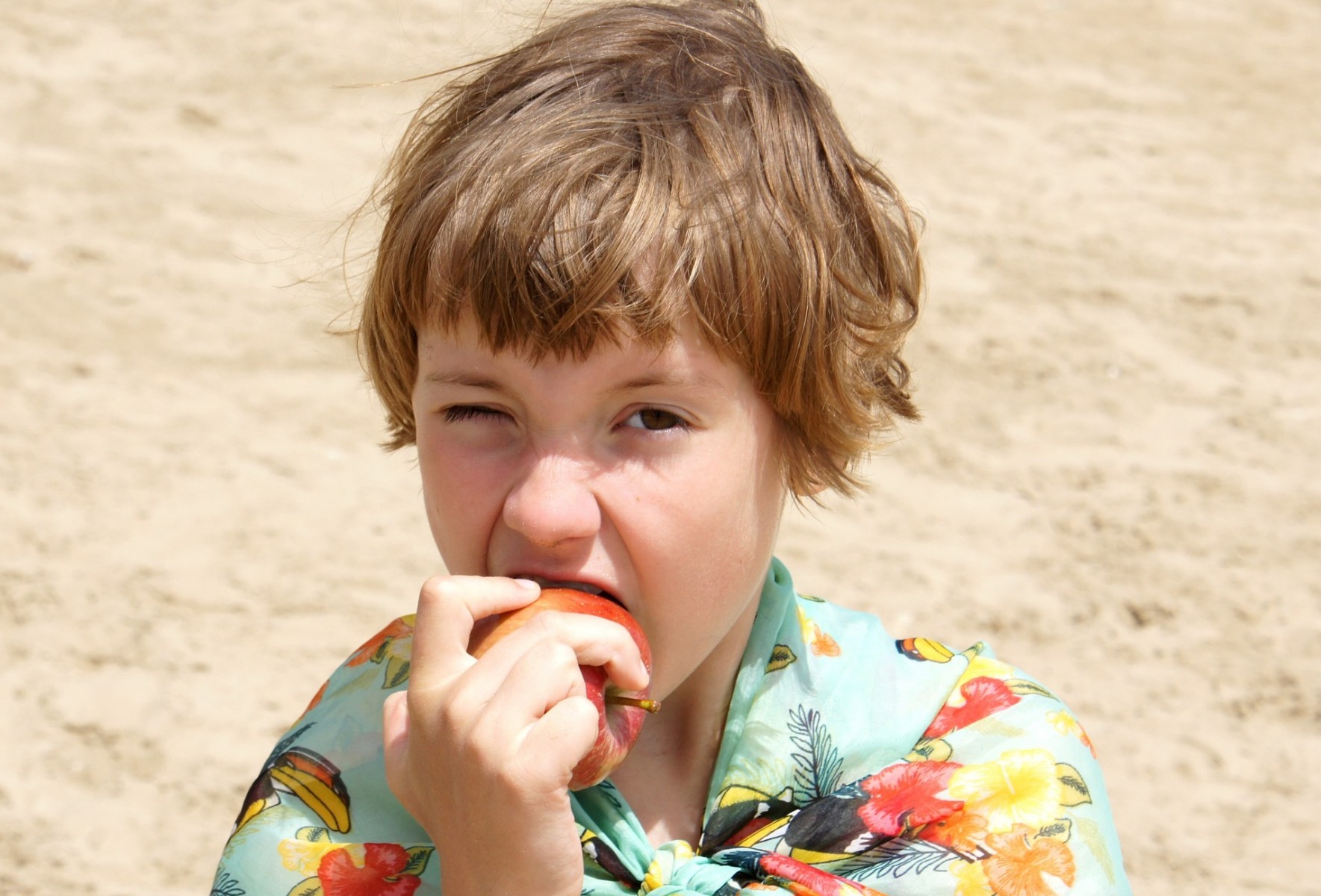 An organic apple contains more microscopic biodiversity, which is an essential ingredient for human health. This was revealed by Austrian research conducted in 2019 that compared the micro-biodiversity of conventionally grown and organic apples. Other new research indicates that microbial biodiversity is crucial for good health. And this is why Eosta is supporting a study carried out by Stichting Bac2nature (Bac2nature Foundation), Vrije Universiteit Amsterdam and Maastricht University on the link between cultivation methods, microbial biodiversity and digestion. “Biodiversity is vitality,” according to Eosta CEO Volkert Engelsman.

Did you know that when you eat a complete apple you ingest approximately 100 million bacteria? Whether the apple is organic or conventionally grown is irrelevant, the quantity of bacteria is the same. But there is a substantive difference - The diversity of the bacteria on an organic apple is far greater, particularly in the flesh. In the Austrian apple study, the biodiversity of organic apples, measured using the Shannon Index, was approximately 6 and approximately 4 in the conventional apple. The Shannon Index is a measure of both the number of species and the degree of uniformity in their distribution. The better the biodiversity, the higher the score. Strikingly, the majority of bacteria were not on the skin. The  greatest differences in biodiversity were detected in the flesh and the core. Volkert Engelsman, CEO of Eosta: “It has long been known that intensive agriculture reduces the diversity of the microbiome in the soil. But now there is also evidence that intensive agriculture impoverishes the microbiome in our food. And that may not be beneficial to health.”

Bac2food will study this subject in-depth

Marco van Es, founder of stichting Bac2nature (Bac2nature Foundation), which studies the relationship between biodiversity and health dares to make an emphatic statement: “Biodiversity is at the core of our health.” In 2020, the foundation and Maastricht University jointly set up a research programme that is currently studying the links between microbial diversity in food and digestion in greater depth. The significant reduction in the cost of DNA analysis has made it much easier to study the biodiversity of microbiomes in food and in the body. Eosta is one of the players supporting the research.

The importance of microbiomes for health

The microbiome has a significant effect on health. Research has revealed that microbes can play a major role in malnourishment and obesity, and affect all our organs through the immune, nervous and vascular systems. By far the most bacteria (and moulds and other micro-organisms) in the human body are in our digestive system. And there also seems to be a clear link between the diversity of the microbiome in the intestines and health. Studies have highlighted a number of facts, including that healthy people over the age of 90 have greater biodiversity in their guts than average adults.

The importance of diversity in your microbiome
The biodiversity hypothesis, a new version of the old hygiene hypothesis, asserts that contact with the natural environment enriches the human microbiome, which boosts the immune system and provides protection against allergies and inflammatory diseases. Consequently, avoiding contact with natural biodiversity (e.g., by eating large amounts of processed and one-sided food) can have a negative influence on the immune system. Scientists agree that exposure to a highly diverse range of micro-organisms early in life is important for the prevention of an overactive immune system. The soil is an important factor in this. Infants growing up in natural surroundings and playing outside ingest large quantities of soil every day. This makes an important contribution to the development of their immune system.

New organic research techniques are producing breakthroughs in this field. MWAS studies (Metagenome-Wide Association), which strive to map out the relationship between the human microbiome and complex diseases (such as Diabetes 2 or Rheumatoid Arthritis), show that the loss of biodiversity in the intestines is linked to the development of chronic ailments. “Nomics” techniques like genomics are steadily making it easier to unravel the connection between soil biodiversity, plant health, food quality and human health.

Logical from an evolutionary perspective
There are also evolutionary arguments supporting the importance of biodiverse microbiomes in food and our habitat. Humans evolved to exist together with a wide range of organisms in our living space and bodies. “And evolution works in such a way that unavoidable living conditions eventually become necessary living conditions,” says Marco van Es. The western lifestyle has a bad effect on the microbiome in the body. Apparently, peoples who live as hunter-gatherers (e.g., the Hadzas in Tanzania) have the highest level of biodiversity in their guts, followed by peoples who practice traditional agriculture, and people who live in western, urbanised societies languish at the bottom of the scale. In the “blue zones”, regions on earth where people have a very long average life span, people eat a lot of fresh, local and self-grown products – with more biodiversity as a result.

All of this constitutes a new argument for the potential health-promoting effect of organic food. Although there is no scientific consensus regarding the healthiness of organic food, there are indicators. Firstly, organic food contains fewer pesticides, and it is known that pesticides cause a number of issues, including disrupting the hormonal balance. Considerably fewer pesticides are detected in the urine of people who have an organic diet. Secondly, organic foods frequently contain more nutrients such as antioxidants. The Austrian research is now providing a new argument – the microbiome of organic food has far greater diversity. For that matter, research conducted by Stanford University in 2012 showed that there are fewer multi-resistant (harmful) bacteria present on organic food.

Proof that food and the food microbiome influences the intestinal microbiome
Although it seems obvious, science does not yet recognise that the food microbiome also has an influence on the microbiome in the body. After all, bacteria that we eat always pass through a bath of stomach acid and other digestive processes. However, a study in the issue of Nature published on 25 May 2020 has produced the first direct evidence that our food affects the microbiome in our guts – apparently, fermented food increases the level of lactic acid bacteria in our guts and blood. In addition, DNA research clearly points in one direction – the genome suggests that our intestinal bacteria all originated from food bacteria. In January 2021, Nature Medicine published new research that uncovered more relationships betweet diet, microbiome and health. According to the publication, these assocations were "driven especially by the presence and diversity of healthy and plant-based foods."

Balance between hygiene and biodiversity

Bac2food study: first results at the end of 2021

A great deal of research is needed to answer this. Since April 2021, Eosta has supported the Bac2food project, which is studying whether eating raw, fresh fruit and vegetables, grown with a rich microbiome, has an effect on the health of the digestive process. In the first instance, the research is studying the effect on digestion, which is modelled using an artificial digestive tract. The first results are expected in October or November 2021 and will be published in early 2022. The research is being conducted by Iris van Zoelen at Maastricht University under the supervision of professor Koen Venema (Maastricht) and by Lucs Jollie under supervision of professor Remco Kort (VU Amsterdam). It focuses specifically on growing methods for tomatoes, cucumber, paprika and lettuce. It must be noted that tomatoes, cucumber and paprika are grown in greenhouses, while lettuce is grown in soil outdoors.

Naturally, biodiversity is not only important in our body. The loss of biodiversity on earth is creating vulnerabilities in all areas – ecosystem services such as fertile soils, water availability and even the climate are affected by it. The same applies to the origination of zoonoses and new viruses such as Covid-19. In 2016, a joint venture including Stanford, Berkeley and New York universities asserted that the effect of the microbiome is an extremely important factor in all of the challenges facing humanity in the field of food, energy, clean water, health and ecosystems. In recent years, the NWO has also issued various research calls for more research on micro and macro biodiversity.

Volkert Engelsman, CEO of van Eosta: “We have degraded the macro-biodiversity of the planet, so we are now being troubled by the micro-biodiversity, with Corona as the current low point. It is becoming clear in a host of domains that biodiversity equals vitality. And that may well be a mega-unique selling point for organic produce. Humans are made from biodiversity. The cells in our bodies are full of material from micro-organisms, from our mitochondria to remnants of viral DNA. We must realise that microscopic life on earth is a precondition for life itself. Bacteria were always regarded as an enemy, as pathogens, in the past. In recent years it has become clear at break-neck speed that bacteria are, in the first place, partners and essential helpers that maintain the balance of human health and the health of the planet. This is why we must back away from chemistry and return to biology.”

Engelsman continues: “Tim Spector, professor of genetic epidemiology in London, wrote in his book The Diet Myth that the diversity of microbes in our bodies is now 30% less than 50 years ago. A diet of junk food dramatically reduces the healthy microbiome in the guts in two days. In short – a great deal of research must still be carried out, but in the meantime you would be wise to eat ‘biodiverse’. In other words, fresh and organic. According to Tim Spector, the only common factor in a healthy diet, healthy guts and a healthy body is diversity. And that is perfectly appropriate for the organic agriculture approach.”

A new reason to eat organic: a diverse microbiome