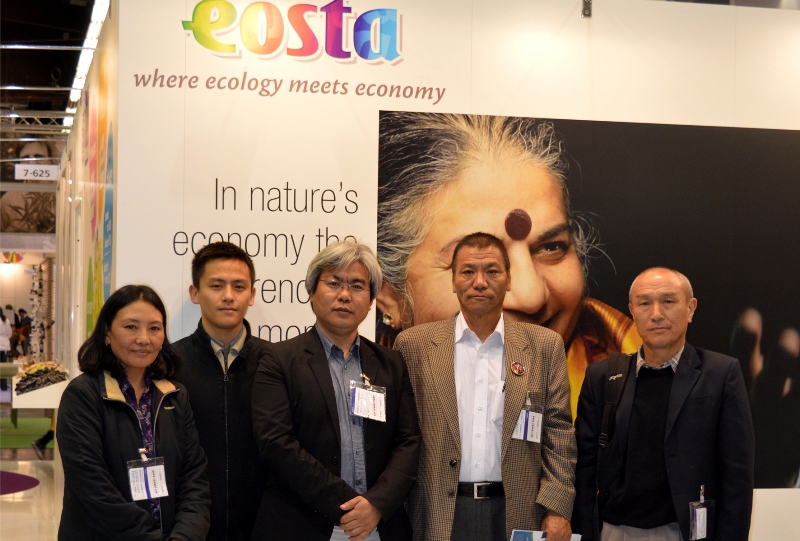 Press release, Waddinxveen 17 February 2016 - Eosta, European market leader in organic fruits and vegetables, has started an exchange with Bhutan, the land of the Gross National Happiness Index. Bhutan is the only country in the world with a 100% organic policy. Eosta CEO Volkert Engelsman was invited to address the parliament of Bhutan in October 2015 and initiated a young leadership program. The aim of the program is to accelerate sustainable development of the Bhutanese countryside, to prevent a brain drain, and to slow exodus to the cities.

Bhutan, a constitutional monarchy in the Himalayas, is the first country in the world where prosperity is not measured only in financial terms, but also by ecological, cultural, societal, and spiritual criteria. The country developed its much-publicized Gross National Happiness Index to this purpose. The Index is more than a theoretical model: Bhutan actually stopped Monsanto from doing business in the country by scoring it against the GNH Index.

In February 2016, a Bhutanese state delegation, including top officials in the field of agriculture, visited Europe and was shown around trade fairs, scientific institutes, and organic farms in the Netherlands and Germany. Eosta organized the trip. The collaboration originates from 2012, when Eosta CEO Volkert Engelsman met Bhutanese prime minister Jigme Thinley and the minister of agriculture at the Rio+20 UN climate convention.

Engelsman was invited to give a speech to the Bhutanese parliament last October, to incentivize its 100% organic policy. Shortly thereafter, Eosta initiated a young leadership program called the “Nature & More – Bhutan Bridge.” Engelsman explains: “We want to prevent a brain drain and an exodus to cities such as we see occurring in many Asian countries. Bhutan has always been isolated and therefore has a unique opportunity to develop in a truly sustainable way. As a company, it is our duty to support that.”

Two promising Bhutanese young men came to the Netherlands to investigate the EU organic market. One of them, Dechen Dorji, has already returned to Bhutan with plans for a new company: Balou's Organic Mountain Wonders. Based in the Bhutan countryside, of course.

Nature & More is the "trace & tell" trademark of Eosta, European market leader in fresh organic fruits and vegetables, with a specialization in overseas fruits and Dutch greenhouse crops. More information can be found at www.natureandmore.com and www.eosta.com.