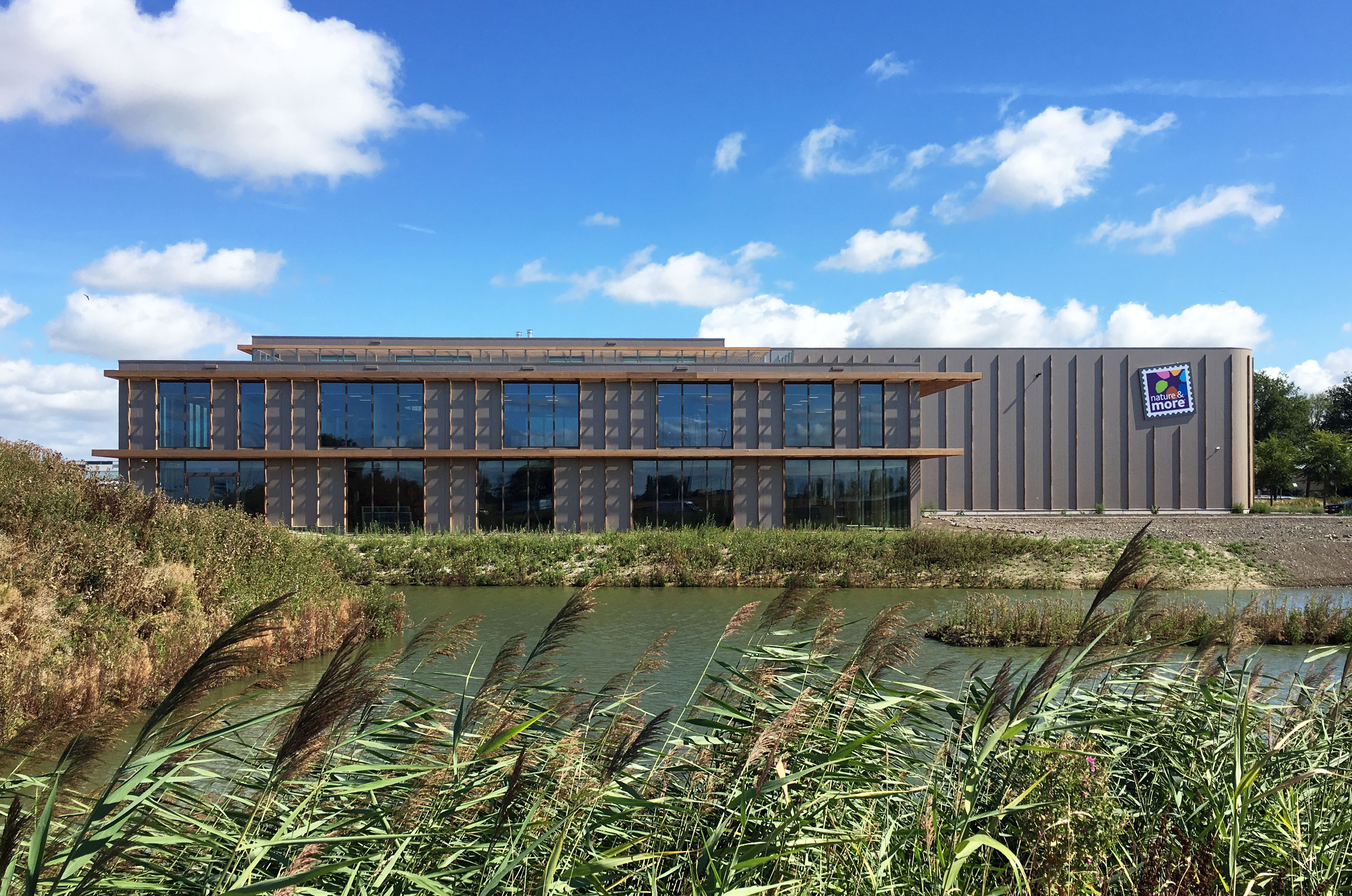 On 3 September, Eosta (also known by consumer mark Nature & More) will permanently relocate to a new and sustainable business property in Waddinxveen, which consists of a head office and distribution centre. The logistics department moved there earlier, in July. With its numerous sustainable and circular properties and spacious set-up, this CSR leader has realised a workplace that throws the door wide open to the up-and-coming new economy.

As Europe’s leading importer and distributor of organic fruit and vegetables, after years of continuous growth, Eosta was in dire need of more space. Preparations for the design and construction of a new building commenced a few years ago. The resulting building exudes warmth and humanity and may be considered the physical expression of the company’s core values of Authenticity, Togetherness and Social Responsibility.

The interior design is organically conformed to the company processes and encourages leadership and self-leadership, co-creation and an innovative and sustainable corporate performance. In short: Dream – Dance – Deliver, as we refer to this at Eosta.

At the heart of the office is a spacious atrium to which all of the offices lead. It thus functions as the main meeting place. The wide bleacher stairs are a real eye-catcher and represent personal development and the connection between social idealism and commercial realism. In other words: ‘where ecology meets economy’, the company slogan.

The building has numerous meeting-places, some with a fireplace, in addition to rooms where employees can touch base with their inner self with/by rest (powernaps) or meditation (library).

Because people are paramount, various spaces have been named after inspirational and special people, including pioneers in organic agriculture and the sustainability movement, such as Albert Howard, Rudolf Steiner, Eve Balfour, Ehrenfried Pfeiffer, Rachel Carson and Daniel Dunlop. Nelson Mandela, Sioux medicine man Black Elk, the UN Secretary-General Dag Hammarskjöld and the deceased employee Erwin Paul are all commemorated here.

The building has many circular and sustainable characteristics. Both the shell and design have a materials passport, which states the materials used to ensure they can be reused as much as possible after demolition The roof of the distribution and packaging halls will be completely covered with solar panels, and rainwater will be collected and used for local horticultural irrigation.

The new building has an invisible heart too. Last year, the foundation stone was placed deep in the ground below the building: a brass solar disk in a metal dodecahedron, indicating the company’s core values and the maxim: ‘Through the sun / From the earth / For man // May man / Become sun / For the earth.’ This expresses the gratitude for the world as it has become and appeals to current and future generations of humans to take responsibility for the new world.

This is the core from which Eosta has been working since 1990 and based on which agriculture, collaboration with growers and the production chain, the sustainability policy, the core values, the 3D HR and leadership policy, the Nature & More transparency system, the model of the Sustainability Flower and innumerable sustainability campaigns have been crystallised.

Eosta created the design in conjunction with interior designer Ex Interiors and interior builder Logge Circulair. Repurchase and reuse contracts were entered into with suppliers to economically secure the circular approach. Thanks to the collaboration, ABN AMRO will form a new ‘Product As A Service’ team to be the first bank to develop the instruments that allow the realisation of a genuinely circular vision on ownership.

The 19,500m² building was designed by Thomas Rau and its shell realised by Systabo on the instructions of VolkerWessels Vastgoed. The fitting out and interior were carried out by Ex Interiors in conjunction with Logge Circulair.

Eosta – with Nature & More as a leading brand – was established in 1990 and in 28 years has developed into a leading distributor of organic fruit and vegetables with suppliers in six continents and markets throughout Europe, the US and Hong Kong. In 2017, its founder Volkert Engelsman was elected No. 1. in the Trouw newspaper Sustainable Top-100. In 2018, Eosta was the recipient of the Koning Willem 1 Sustainability Award.