EOSTA saves the bees – starting around its own office 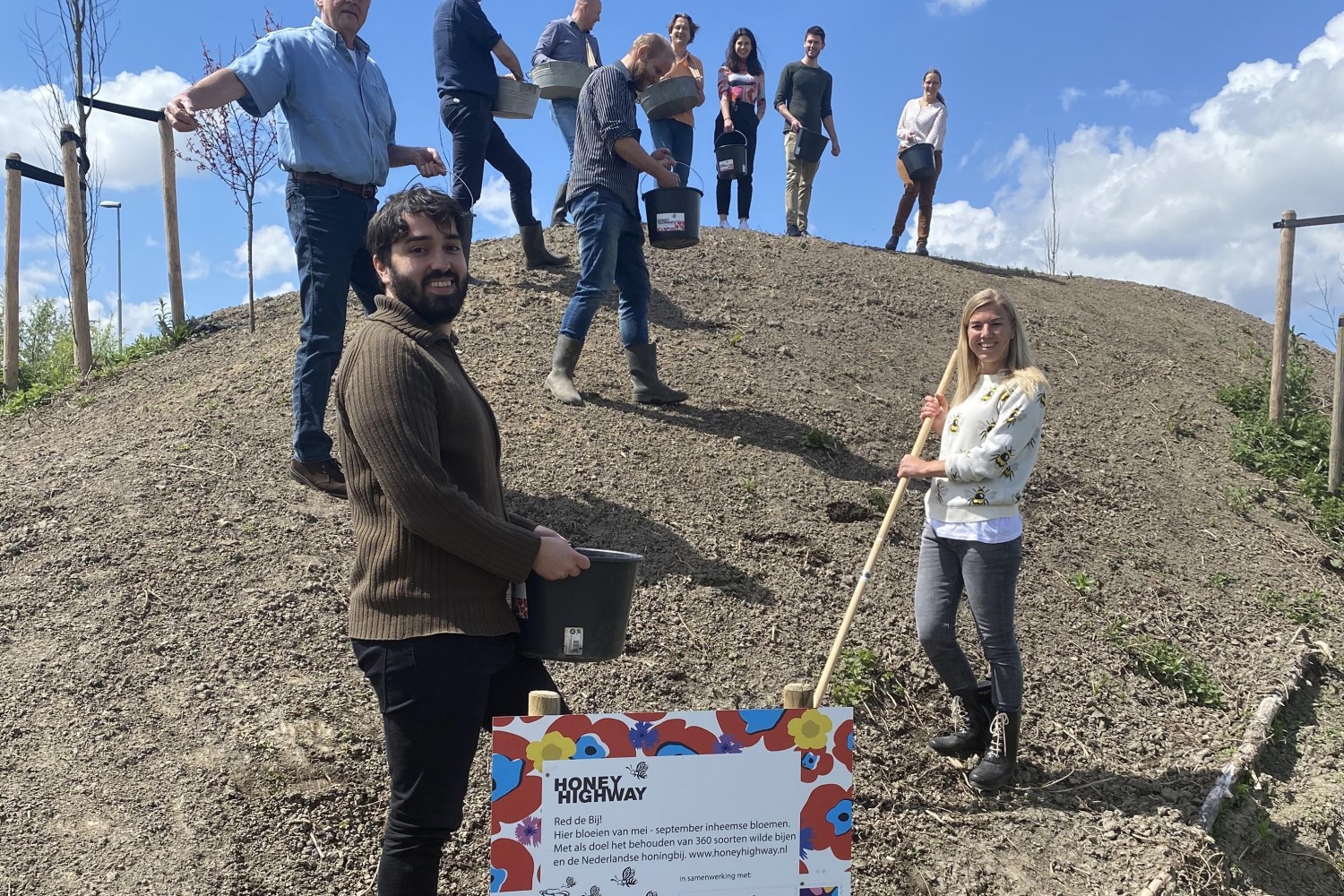 “Bee the change you want to see in the world!”

Eosta, European market leader in fresh organic fruit and vegetables, uses native wildflower seeds to create a sea of flowers around their company headquarters in Waddinxveen. This is desperately needed because wild bees and biodiversity are not doing well in the Netherlands or the rest of the world. In the coming years, this sea of flowers in the making may naturally expand to the surrounding roadsides and other company grounds.

A little hill near Eosta’s head office, built using circular economy principles in Waddinxveen, was last week renamed ‘Honey Hill’ after it was sown with 40 to 50 varieties of native flower seeds. This summer it will become a sea of flowers for wild bees, honey bees, bumble bees, butterflies and other insects. Robert van Melle, product manager for citrus fruit & grapes, was behind the initiative: “We are asking our organic growers all over the world to support biodiversity through the Sustainability Flower. But what are we doing ourselves? We have now enriched the area around our office and all the staff have been given some seeds to plant at home. Bee the change you want to see in the world!”

Eosta’s organic fruit growers tend to do their best to create an attractive environment for bees as they depend on them for pollination. For example, take citrus grower Daniel Silva (code 255 on www.natureandmore.com), who deliberately grows a lot of wild herbs between the lemon trees to attract wild bees and other favourable insects. In Daniel’s words: “I absolutely love weeds, or wild plants and flowers if you prefer! We don’t need to set up any bee hives in the orchard because the insects and wild bees come by choice.”

Eosta’s support for bees is far from new. As early as 2012, Eosta gave out 400,000 bags of flower seed, in cooperation with Bionext and the Dutch Bijenstichting (foundation for bees), as part of the campaign ‘Bees love organic’. Volkert Engelsman, general manager of Eosta: “Bees may be tiny creatures, but as pollinators they are critical to the early stages of our organic fruit and vegetables. Since 1990, our company has opted for 100% organic production, to protect biodiversity. We do this on a large scale, but also on a small scale, right next to our own office. Since we started we’ve already spotted a kingfisher, marter, common teals, greylag geese and all kinds of birds of prey.”

Deborah Post from Honey Highway made sure there was a native mix of flower seeds suited to the soil type and region. She gave a presentation in which she explained that half of the 360 wild bee species in the Netherlands are threatened with extinction. “There are far too few wild flowers in the Netherlands because everything is perennial ryegrass used for the production of cow’s milk. Wild bees get their pollen from specific species of wild flower. With a mix of regional, native flower seeds, you can increase biodiversity.”

Eosta, with Nature & More as its consumer brand and transparency system, is Europe’s most awarded distributor of organic fruit and vegetables. Eosta is known for its sustainability campaigns such as Living Wages, True Cost of Food and Dr. Goodfood. In 2018, the company won the King William I Plaque for Sustainable Entrepreneurship and in 2019 the European Business Award for the Environment. See also www.eosta.com and www.natureandmore.com.

EOSTA saves the bees – starting around its own office