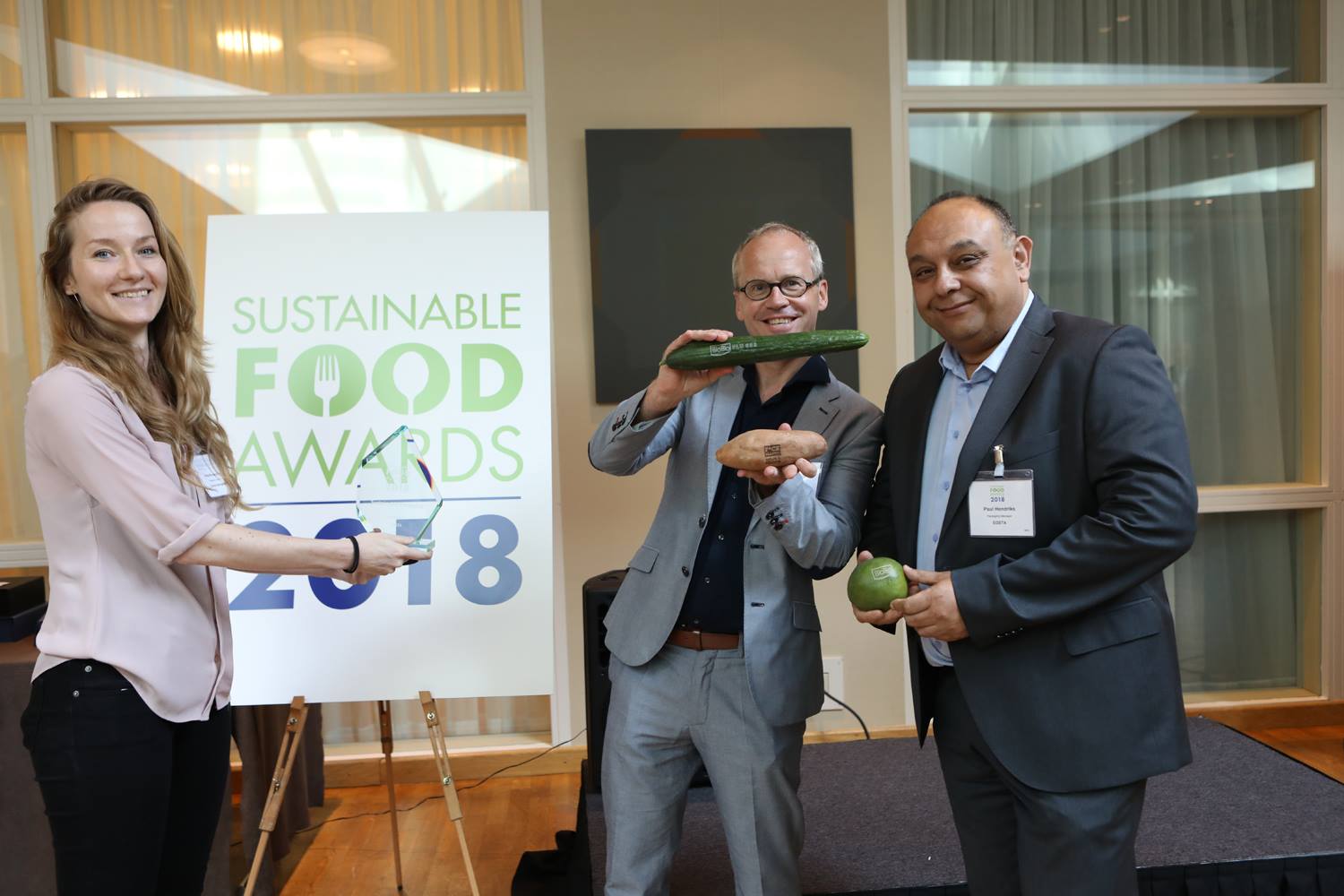 Last week Eosta landed a Sustainable Food Award for its ‘Natural Branding’ scheme, ahead of competition from Switzerland and the UK. Eosta has been applying Natural Branding laser marking on organic produce since 2016, in order to battle against environmental polluting plastic. So far Eosta has already saved 6.3 million plastic packaging units. Major retailers in Sweden, Germany and the Netherlands have embraced the technique and continue to do so.

The Award Ceremony took place on Thursday 7 June at the Mövenpick Hotel in Amsterdam. Other nominated parties were Earthpouch (UK ) and Multibag (Switzerland). Paul Hendriks, packaging expert at Eosta, is pleased with the recognition and the growing impact of the innovation he adopted almost two years ago: "As I always remind people, the most sustainable way to pack is not to pack. Natural Branding makes this possible. Green consumers are delighted, because research shows again and again that they disapprove of oil based plastic packaging."

Together with its retail partner ICA in Sweden, Eosta started applying Natural Branding on organic avocado’s and sweet potatoes in December 2016. The innovation was noted worldwide and many supermarket chains queued up to join in: after ICA in Sweden REWE, Netto and Edeka followed in Germany, Spar in Austria and Hoogvliet and Albert Heijn in the Netherlands. Only last week, Dutch supermarket chain Jumbo jumped in, announcing it will apply the technique to zucchini, ginger and pumpkins.

Organic products must be distinguishable from non-organic products in the supermarket by EU law, which unfortunately leads to organic products being packed. Eosta has been developing sustainable packaging alternatives for years, a road which led from bioplastics and compostable stickers to sugarcane carton, cellulose netting and Natural Branding.

Natural Branding is the organic approach to marking fruits and vegetables with laser. The contact free method has been approved by organic certifiers, while no additional agents are used. The process does not influence taste or shelf life. As a bonus, the energy needed for applying a laser mark is less than 1% of the energy needed for a sticker.

Currently Natural Branding is being applied to avocado, zucchini, ginger, coconut, cucumber, mango, pumpkin and sweet potatoes. Since December 2016 Eosta has save 6,3 million plastic packaging units, 88 metric tons of plastic, 38,000 m2 of paper and 396 metric tons of CO2-emissions. The counter is still running. Eosta is working with several machines now.

About Eosta en Nature & More
Eosta – with Nature & More as its “trace & tell” brand – was founded in 1990 and grew into Europes’s leading distributor of organic fruits and vegetables. CEO Volkert Engelsman occupies the nr 1 position in the Dutch Sustainabilty Top-100 list. WWW.NATUREANDMORE.COM