European retail embarking on ‘Save Our Soils’ campaign 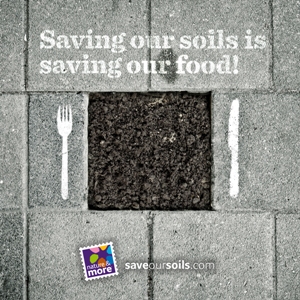 After carbon footprinting and fairtrade schemes, saving and restoring soils might well become the new sustainable trend hitting European retail shelves. On 5 December, World Soil Day, Nature & More is launching an awareness campaign on the theme of soil degradation, in alignment with WWF and FAO, the Food and Agriculture Organization of the United Nations. The Nature & More Save Our Soils campaign (www.saveoursoils.com) invites consumers to become urban farmers and buy organic food. Nature & More has teamed up with various European partners and retailers to bring the message to the general audience.

'If we don't protect the basis of our food production and our ecosystems - which is soil - we will have a big problem in the future,' says Alexander Müller, Assistant Director-General of the FAO. Publications from the United Nations and the European Commission indicate that every minute the equivalent of 30 soccer fields of fertile soil is being destroyed, mostly due to irresponsible farming techniques. As a result, we are losing 10 million ha of farmland every year. Today ¼ of the earth's soils are highly degraded, according to scientists.

The Save Our Soils Campaign will run from December 2012 until December of 2017, the International Year of Soils. The campaign points to organic farming as the "soilution" and encourages consumers to buy organic food or get involved in urban farming. Marc Swilling, professor of Sustainable Development at Stellenbosch University, supports the claim that organic farming is a major key: "Our planet now has 720 million hectares of lightly degraded soils, which can readily be restored by using sustainable and agro-ecological farming techniques."

Volkert Engelsman, founder of Nature & More and initiator of the Save Our Soils campaign, explains why the campaign is focussed on consumers, rather than institutions: ' Consumer decisions can shape the world. Every time you spend money, you're casting a vote for the kind of world you want. We find that the link between healthy food and healthy soils is surprisingly obvious to consumers. Living soils are not just the foundation of our food chain, but of our civilization in general. The condition of our soil affects every other possible aspect of sustainability: climate change, pest & disease resistance, nutritional value of our food and many more. So we're thrilled that our retail partners are enthusiastic and ready to address this issue.'

European retail embarking on ‘Save Our Soils’ campaign