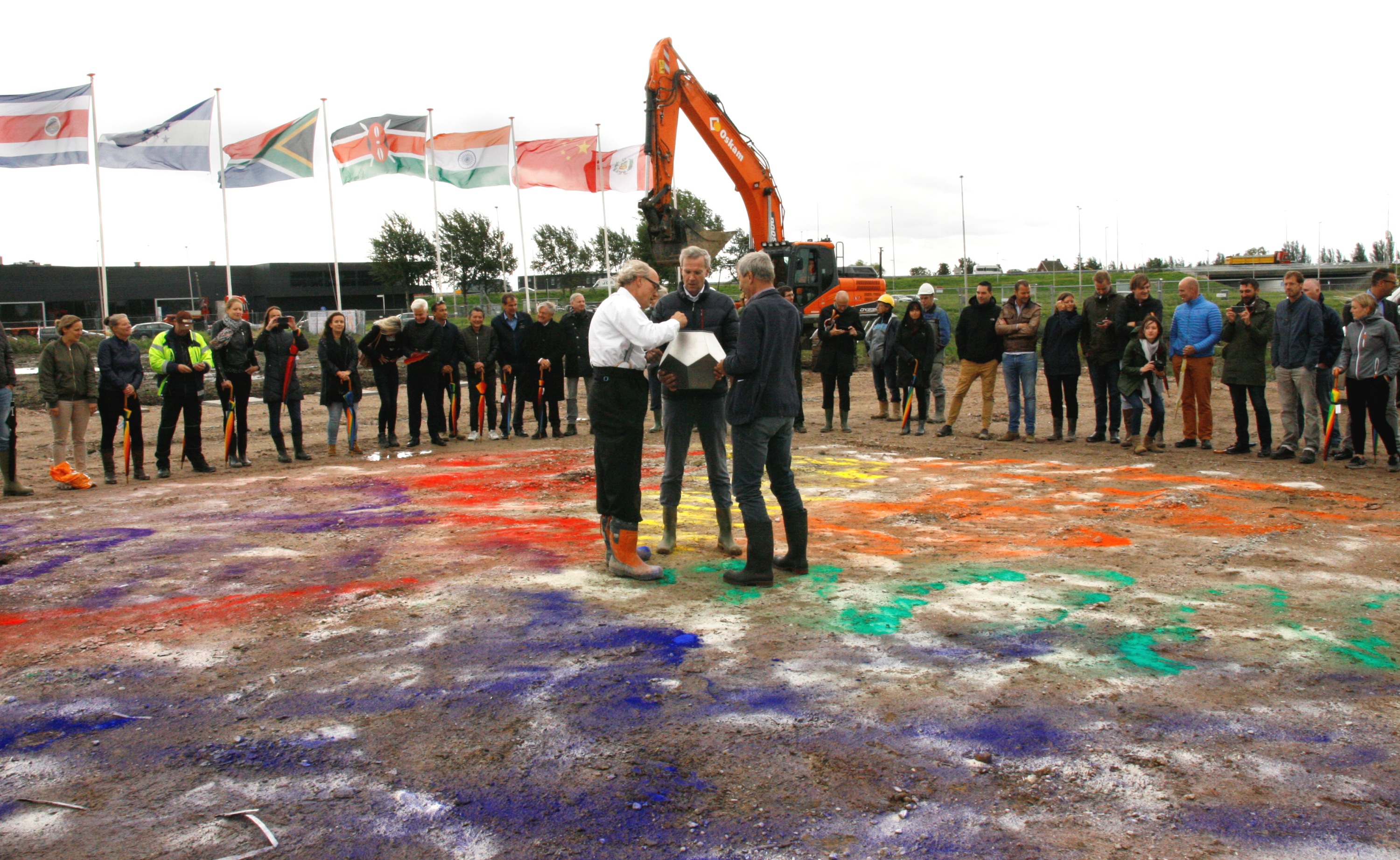 On Thursday 14 September, 2017, the foundation stone of the new Eosta headquarters was laid in Waddinxveen, the Netherlands. The ‘stone’ was in fact a steel dodecahedron containing the core values of the company. To the accompaniment of kettledrums and some meaningful words, these core values were placed in the soil. Eosta, a specialist in organic fruits and vegetables, aimed to convey via this short ceremony that the new building will be more than a business building: it’s meant to be a forerunner of the new circular economy. The building, measuring 19,500 square metres and costing €22.5 million, was designed by pre-eminent architect Thomas Rau and will be completed mid-2018.

​Volkert Engelsman (Eosta’s CEO) commented: “The foundation stone is more than just an object; it stands for our core values: authentic, together, responsible. They are the basis of all our actions so it follows that we chose a circular approach and matching work environment. The building will feature a large atrium in the middle of all the offices, many meeting places, fireplaces, and spaces for meditation and naps. The fireplaces are built into walls made from concrete and broken toilet bowls, while the company kitchen is furnished with second-hand to eighth-hand supplies.”

Not lamps, but light hours

The circular economy principles are most extensively implemented in the lighting plan. The case is this: Eosta is not buying lamps, but ‘light hours’ where Philips Lighting provides light not bulbs. This leads to a modular and demountable installation where ideally nothing is discarded after use. Philips Lighting is developing the new circular approach, which encourages them to make the materials reusable and replaceable. Since Philips will also pay the energy bill, there is a continuous incentive to innovate and make the lamps as energy efficient as possible.

The circular approach can be demanding for contractors and suppliers, as Volkert Engelsman found when planning the project. ‘Instead of buying beams for the new building, we wanted to buy “carrying capacity”; instead of cooling installations, we wanted to buy “temperature conditioning”. We’ve had to drop those ideas because suppliers were perplexed. As a company that tries to run ahead of the mainstream economy, we sometimes have to compromise. But the ideal is what we are continually focused on. That’s also what we wanted to convey in the foundation stone ceremony.’

Eosta - with Nature & More as its leading brand - was founded in 1990 and in the course of twenty-seven years has grown into a leading distributor of organic fruit and vegetables, with suppliers on six continents and customers across Europe, the US, and Asia. Starting from our core values ​​- responsible, together, authentic – Eosta wants to contribute to healthy food, a sustainable environment, and social responsibility.