Media coverage of Save Our Soils action Berlin - on national TV! 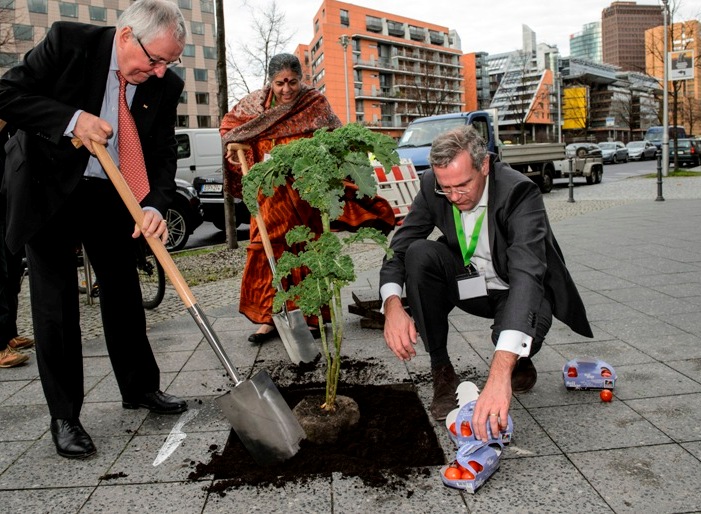 The Save Our Soils guerrilla farming action in Berlin on October 28th during Global Soil Week has been a huge success. The German national ZDF-channel broadcasted an item in the evening news about the soil problem and showed footage of the guerrilla planting action. World famous activist Vandana Shiva, Klaus Töpfer of Global Soil Week and Volkert Engelsman of Nature & More participated in unsealing a small part of the Berlin pavement, planting cabbage and promoting the Soilmate, a product developed for the campaign.

Here is some of the media coverage of the action (in German):

ZDF
The ZDF-item can still be seen HERE.

BioPress
A great article about the Save Our Soils guerilla action.

Demeter
Demeter published an article about the Berlin action.

Geo.de
An interview about the Berlin action with Klaus Töpfer.

Fruchtportal
An article about S.O.S. on the business-to-business platform Fruchtportal.

The guerrilla farming action on ZDF-television
The Soilmate had a prominent role in the action. The Soilmate is a product developed by Nature & More to draw consumers' attention to the subject of soil degradation. It consists of a small purple box containing organic vine tomatoes, compost and basil seeds, as well as information about the soil issue and an appeal to the consumer to get involved in urban farming.

Vandana Shiva and Volkert Engelsman with the Nature & More Soilmate.

Media coverage of Save Our Soils action Berlin - on national TV!