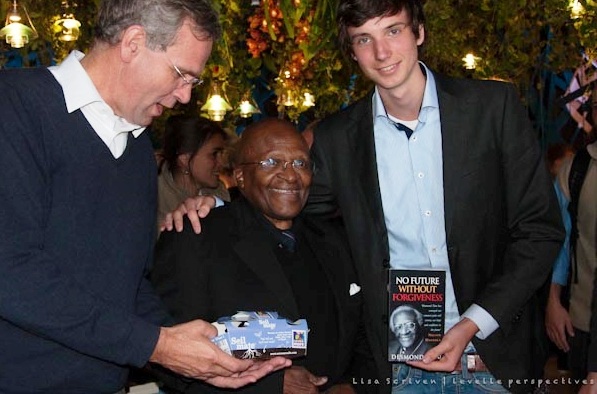 Archbishop Desmond Tutu, Nobel prize winner and soul mate of Nelson Mandela, recently received a "Soilmate" from Dutch entrepreneur Volkert Engelsman. The initiator of the international Save Our Soils campaign was in South Africa to work on soil recovery, including projects in the townships of Cape Town. Tutu approvingly cited a quote by Mandela: "Each time one of us touches the soil of this land, we feel a sense of personal renewal." Liliane Ploumen, Dutch minister for Foreign Trade and Development, was also present at the event.

Tutu accepted the "Soilmate" (a box with organic tomatoes, compost and basil seeds) while expressing his support for the Save Our Soils campaign, which was set up to raise public awareness in the advent of the Year of Soils 2015. The campaign was initiated by Volkert Engelsman, CEO of Nature & More (an international specialist in organic fruit and vegetables), with the support of FAO and 60 other organizations. Archbishop Tutu has been expressing concern about environmental issues for years and is an ambassador for Justdiggit, one of Save Our Soil's partners.

The Save Our Soils campaign wishes to make consumers aware of the importance of fertile soils for mankind's survival. Soils are a theme that is not very high on the agenda of politicians. The UN however are warning that soils are currently being lost at an alarming rate of 30 football fields per minute. This has a disastrous effect on the climate, food security, fresh water supplies and biodiversity. All these issues are connected through soil. That is why the UN has proclaimed 2015 as the International Year of Soils.

The core message of Save Our Soils is that consumers can have a positive impact on the climate and soil problem by choosing sustainable organic products. This starts with conscious shopping in the supermarket. In the past, archbishop Tutu has repeatedly called attention to consumer responsibility. In a speech on climate change, he stated: "I appeal to ordinary people in rich countries to behave as world citizens instead of isolated consumers. We should listen to our conscience and not to governments."

Nature & More is working with the Desmond Tutu Peace Centre in Cape Town on township projects, the exchange of young leaders and development of organic agriculture. Fruit growers of Nature & More are restoring degraded soils with compost in the Cape Town area. Furthermore Engelsman, visiting projects in the poor townships of Langa and Nyanga, promised to supply them with high quality compost and tools. Last but not least, a selection of "young heroes" from the Ocean View township will come to the Netherlands in 2015 for a leadership exchange.

Foto: Save Our Soils initiator Volkert Engelsman offers a "Soilmate" to archbishop Desmond Tutu, assisted by his son Maurits, embodying the new generation.