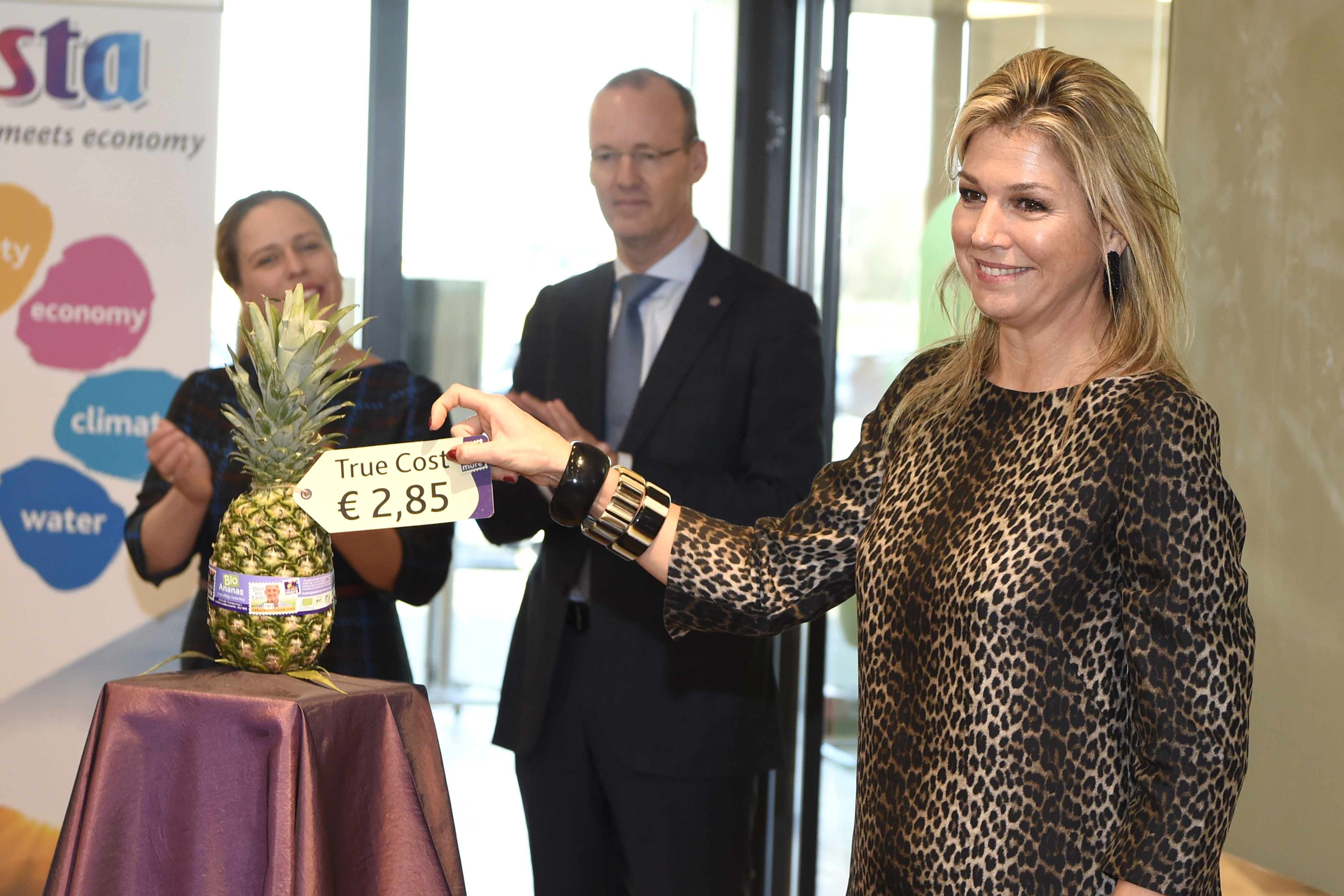 Rotterdam, 4 December 2018 - Her Majesty Queen Máxima of the Netherlands today revealed a ‘True Cost’ pineapple at the offices of Eosta near Rotterdam. The reveal went with a price tag and was followed by a high-level debate. The ‘true cost’ of the Nature & More pineapple was really €2.85, Eosta Managing Director Volkert Engelsman explained. For this price the pineapple can be grown sustainably, benefiting people and planet, instead of conventionally, passing on the hidden costs of production to future generations. The transition to an economy based on 'True Cost Accounting in Food Farming & Finance’ was further explored in a debate that followed, in which the queen actively participated.

Queen Máxima paid a working visit to organic fruit and vegetable distributor Eosta because the company was elected most sustainable company of the Netherlands in 2018. The central theme of the visit was True Cost Accounting, a method to include the hidden costs of production, including food production, on people and planet in profit and loss statements and in pricing. Eosta is a leader in bringing True Cost accounting into practice, for which it won the King William I Sustainability Prize and the European Business Award for the Environment.

New profit definition
In the debate, the UN Sustainable Development Goals and the pathway to a new inclusive profit definition were discussed at length. Speakers included Klaas Knot, President of the Central Bank of the Netherlands; Carola Schouten, Minister of Agriculture, Nature, and Food Quality; Felix Prinz zu Löwenstein, Chairman of the German Federation of the Organic Food Industry BÖLW; Jaap Seidell, Professor of Health Sciences; and Peter Bakker, Chairman of the World Business Council for Sustainable Development. Having been an economist and banker in the past, Queen Máxima showed great commitment to the subject.

Actual costs
Host Volkert Engelsman elaborated: ‘We are inevitably headed towards a new economy in which the hidden costs for people, the environment, and society – the so-called externalities – will be included in profit and loss accounts, as they should be. The challenge for science is to identify the actual costs, while it is up to the government to create a level playing field in the market that ensures polluters pay. The challenge for the business community is to free sustainability from the isolation of the staff departments and allow it to sink into the DNA of their profit and loss accounts.’

Investments worth €159 billion will evaporate
The international financial world is currently fully engaged in calculating hidden costs as a part of risk analysis, according to Klaas Knot of the DNB. Invested capital of €159 billion will ‘evaporate’ when climate change measures such as a carbon tax are implemented, climate stress tests carried out at Dutch institutional investors revealed in October 2018. Thanks to this type of risk analysis, sustainability is becoming firmly rooted in the financial world.

Meaningfulness
Engelsman added: ‘We should not only look at the numbers, but also beyond them. Ultimately, there is a question of purpose and meaning behind the way we structure our economy. What do we define as profit? What do we aim for as humanity? Once you start asking these questions, it becomes obvious that a vital ecosystem, a healthy population, and a humane society should also be considered as “profit”. An inclusive profit. That is the essence of the new economy we are moving to. ‘

The 17 SDGs as a beacon
In the debate, the 17 UN Sustainable Development Goals were used as a guideline for the design of the new economy. Engelsman: ‘We need a common objective in order to join forces. The 17 SDGs are embraced by the entire global community, a unique fact and a great opportunity.’

Queen Máxima visited Eosta in relation to the presentation of the King Willem I Sustainability Award to the organic fruit and vegetable specialist in 2018.

Eosta – with Nature & More as a consumer brand – was established in 1990 and in 28 years has developed into a leading distributor of organic fruit and vegetables with suppliers on six continents and markets throughout Europe, the US, and Hong Kong. The company is known for its sustainability campaigns such as The True Cost of Food, Natural Branding, Dr. Goodfood, and Save Our Soils. In 2018 the company won the King Willem I Plaquette for Sustainable Entrepreneurship and the European Business Award for the Environment. See www.eosta.com and www.natureandmore.com.