Waddinxveen / Stockholm, 13 June 2017 - Food production has many hidden impacts on people and planet, including impacts on climate, health, water quality, and soil erosion. Financial auditor EY and sustainability consultant Soil & More have developed a method for small and medium-sized enterprises to calculate these hidden costs including a practical dashboard. To illustrate their method, they calculated the impacts of organic distributor Eosta, resulting in data for nine types of produce and a True Cost Profit & Loss statement. For soil and health impact, large differences were found between organic and non-organic production. The study was presented at the EAT Food Forum in Stockholm, on 13 June 2017. 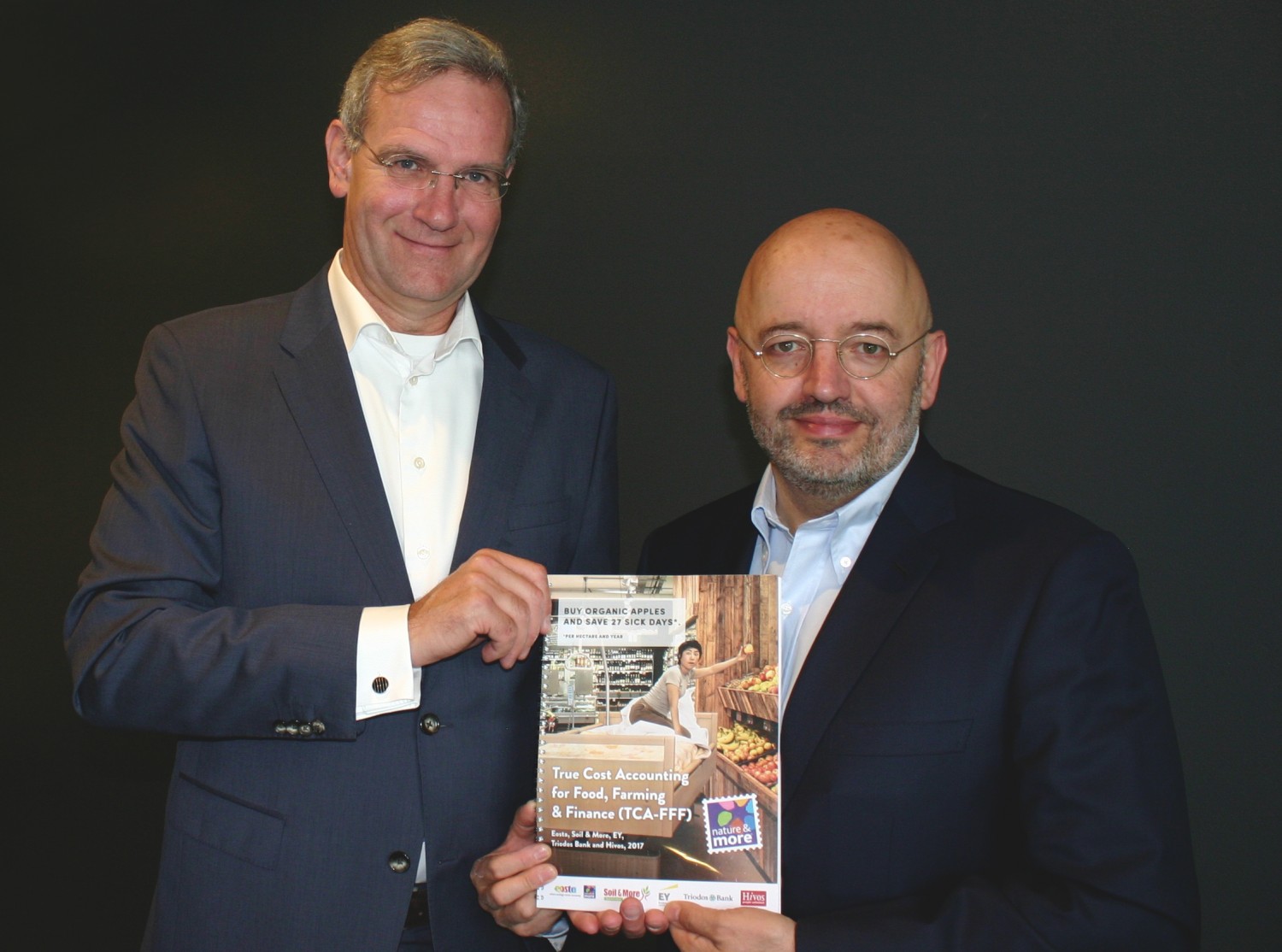 Volkert Engelsman, CEO of Eosta, presented the report ‘True Cost Accounting for Food, Farming and Finance’ to Peter Bakker, President of the World Business Council for Sustainable Development (WBCSD). Bakker commented: ‘The results for the business case of Eosta in this report illustrate how True Cost Accounting changes the definition of profit and tackles perverse incentives. I predict that True Cost Accounting will seriously affect the valuation of companies and their access to capital within a few years.’

One of the first

The study, which was supported by Triodos Bank and Hivos, calculated the cost of impacts such as water pollution, pesticide exposure, greenhouse gas emissions, and soil erosion. The organic products included apples from Argentina, carrots from the Netherlands, and avocados from Kenya. Their impacts were compared with non-organic products from the same supplier or the same area. The report also included an Integrated Profit and Loss statement for Eosta, which is one of the first to be published for a SME company worldwide. IFOAM, FAO, and the WHO were also involved in the project.

Volkert Engelsman, CEO of Eosta, explains: ‘We have developed a practical dashboard for small and medium-sized enterprises in the food, farming, and finance sectors that monetizes the hidden impacts of food production on people and planet. The underlying sustainability model is the Sustainability Flower, which defines Key Performance Indicators (KPIs) for both social and ecological aspects. We asked EY to focus on the twenty per cent of the KPIs that represent eighty per cent of the impact. The pilot is obviously far from complete, but we want to be pragmatic and act. We need to empower consumers and stakeholders, including the finance sector, to act responsibly and make informed business decisions.’

One of the most remarkable findings was the different impact on health between organic and non-organic products. The study looked at the impact of pesticide application for consumers and the impact of work safety for farmers and workers. The study used research data from Danish scientist Peter Fantke, the European Food and Safety Authority, and the EcoInvent database to determine the effects of pesticide exposure. The World Health Organization provided the metrics to monetize health impacts. Combining the data, EY arrived at considerable differences between organic and conventional products. The difference was biggest for apples from Argentina—€0.19 per kilo. At a consolidated Eosta level, the difference was found to be €2.3 million.

Peter Bakker commented: 'The True Cost Accounting in Food, Farming, and Finance pilot has put a new benchmark in the market. I hope that others will follow and scale it up. The systems failure of our present economic system, leading to multiple crises, forces us to re-define profit, and True Cost Accounting is an important tool to achieve that goal. This pilot has provided us with a practical and integrated approach.'

Other SMEs ready to step in

Volkert Engelsman announced that this pilot is just the beginning: 'The next challenge is to deepen and broaden the applied metrics in order to define the costs of externalities as realistically as possible. The response of the food, farming, and finance sectors has been overwhelmingly positive so far; companies are lining up to apply this method to their own businesses. We are looking forward to close cooperation with research institutions as well as SMEs such as Lebensbaum, Ritter Sport, Alnatura, and the GLS Gemeinschaftsbank Germa-ny, who have all expressed a strong interest in the new dashboard.'

Eosta is a leading European distributor of fresh organic fruit and vegetables, based in the Netherlands. Nature & More is its much rewarded "trace & tell" trademark which provides transparency about origins, sustainability and True Cost. More information: www.natureandmore.nl en www.eosta.nl.