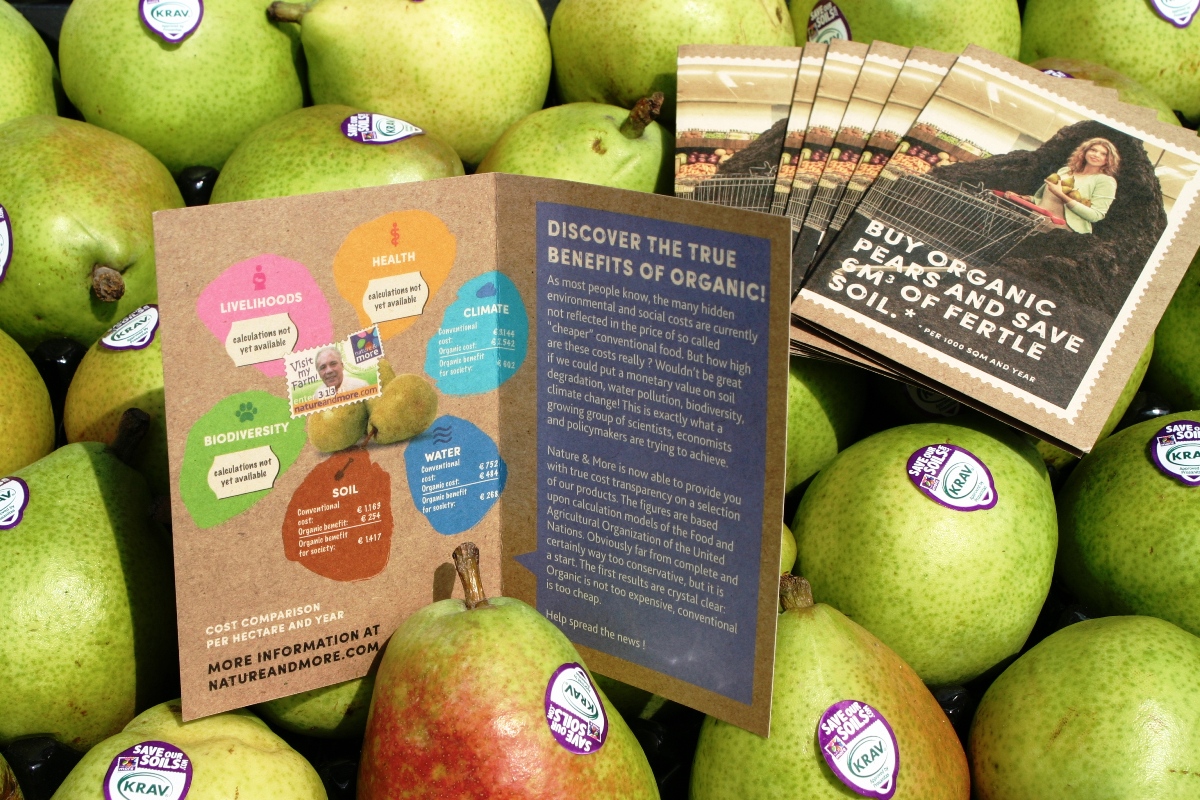 Waddinxveen, 2 March 2017 - At BIOFACH 2017, organic produce specialist Eosta, EY, and others presented two scoops: the first-ever True Cost P&L statement for a medium-sized company, and the first-ever True Cost results for the health impact of pesticide residues on produce. The results illustrate how exter-nalised costs create an unequal playing field between companies that take sustainability seriously and companies that don’t care. Prominent German politicians and environmentalists Klaus Töpfer and Renate Künast called urgently for measures by the public sector— which often has to carry the burden of externalisation.

The recent takeover attempt of Kraft Heinz, which offered $149 billion for Dutch food multinational Unilever, is a clear example of what externalisation leads to. Unilever has a strong sustainability policy, striving for long-term growth. However, under the current economic system, this results in higher costs and reduced short-term profits. Kraft Heinz is looking to buy Unilever, cut all the costs related to sustainability programmes, create an ecological disaster along with a huge short-term profit, and cash in on it.

‘Luckily Paul Polman told them to take their money elsewhere’, comments Volkert Engelsman, CEO and founder of Eosta. He feels a kinship with Paul Polman, the CEO of Unilever, in his aim to combine ecology and economy in business. But Engelsman is more fundamental, choosing a 100% organic approach since 1990. He continues: ‘It's pretty amazing that our current economic system still allows the kind of destructive approach that Kraft Heinz is following. Shareholders should not be able to tell us to destroy ecosystems. True Cost Accounting will help to stop this kind of exter-nalisation and destructive approach to doing business.’

At BIOFACH, Engelsman presented preliminary results of the True Cost Accounting in Finance, Food, and Farming, together with accounting firm EY and other partners. EY and Soil & More Inter-national did the calculations. In 2016 they worked mainly on Natural Capital, but they have now also modelled Social Capital, including the impact of pesticide residues on consumer health. Using data from Danish scientist Peter Fantke, they came to considerable health cost advantages for organic fruit. The difference was biggest for organic apples, € 0.14 per kilo. The DALY concept (disa-bility-adjusted life years) was used to calculate the impact, based on a life-cycle assessment approach.

Previous True Cost calculations by Eosta in 2016 considered the impacts on Natural Capital only: soil, climate, and water. When those numbers are added to the newly calculated amounts, the pilot comes to a total benefit of organic apples compared to conventional apples of € 0.21 per kilo. Considering that 81 million metric tonnes of apples are eaten worldwide every year, this is a serious impact.

At BIOFACH, Renate Künast and Klaus Töpfer, two prominent German politicians and thought leaders, spoke positively about the pilot and urged the government to take measures based on True Cost Accounting to create a level playing field between responsible and exploitive companies. Künast, former minister of agriculture and chair of the Green Party, pleaded for a carbon tax and other tax measures to make polluters pay. Töpfer, formerly director of UNEP and currently director of IASS, stressed the need for laws and policies to constrain negative impacts and discourage destructive approaches.

The True Cost Accounting in Finance, Food, and Farming pilot was undertaken by Eosta, Triodos Bank, EY, and Soil & More, with support from Hivos. The goal of the pilot is to work towards a pragmatic True Cost balance sheet and P&L statement for a medium-sized company. At BIOFACH, a preliminary P&L was presented by Tobias Bandel, director of Soil & More. The graph showed how hidden costs and benefits could equal or even surpass financial profits. For example, Eosta has benefited society by approximately €1 million in soil conservation according to the calculations, because it supports growers in sustainable soil management. Bandel: ‘For the integrated P&L sheet, we do not have a benchmark yet. But since our True Cost comparisons at product level show that conventional produce has higher externalised costs, we also expect to see this at the consolidated company level.’

The results of the pilot are planned to be released in March. The pilot will then continue with fur-ther investigations into the banking implications of True Cost Accounting, and will produce calculations for other companies. Further work is anticipated to enhance completeness and accuracy. Engelsman: ‘Our ultimate goal is for the pilot to give us a practical dashboard tool whereby other companies in the food sector will be able to evaluate their impact on natural and social capital in a practical and straightforward way.’

Notes for the editor:

The ‘True Cost Accounting in Finance, Food and Farming’ pilot follows the framework of the Natu-ral Capitol Protocol, which was published by the Natural Capital Coalition (NCC) in 2016. The NCC was founded in 2012 with the goal of readdressing the balance by helping companies maintain or improve natural capital. Participants include Whole Foods, EY, FAO and the World Business Council for Sustainable Development which counts Nestlé, Unilever, Heinz and Cargill among its members.