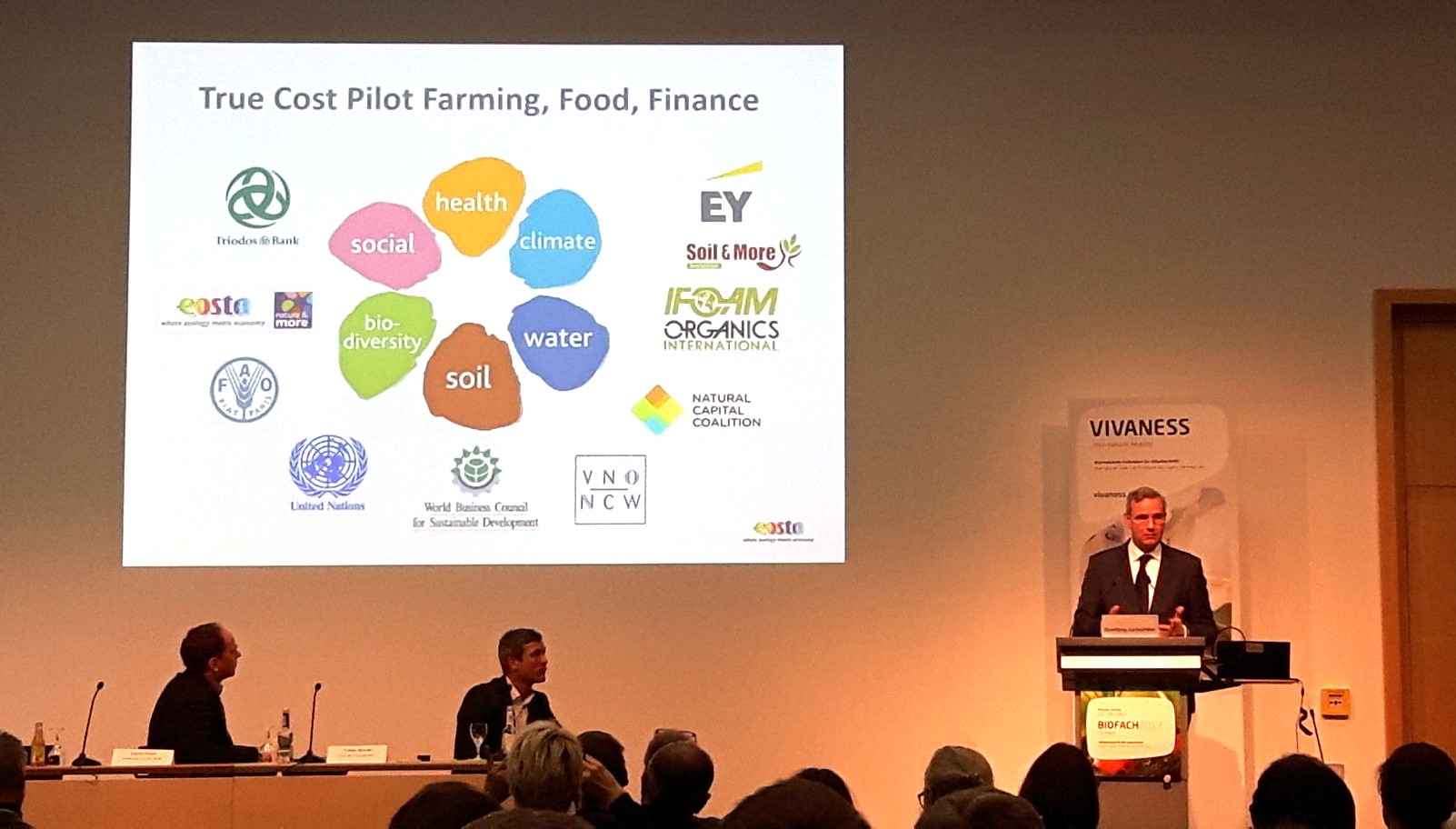 Waddinxveen, 16 Feb 2017 - Organic fruit specialist Eosta, accounting firm EY (formerly Ernst & Young) and other partners today will reveal the first results of a groundbreaking pilot programme that demonstrates how organic fruit production has a positive economic impact for not just agriculture and the environment, but also for consumer health.

The results of the pioneering True Cost Accounting pilot programme have found significant hidden benefits to consumer and producer health of buying organic fruits, including apples, pineapples, tomatoes, pears, citrus and bananas, due to the negative impact of pesticide residues. In fact, in the case of organic apples, the benefit to consumer health has been calculated at €0.14 per kilo compared with conventional apples. For pineapples, the positive deficit has been estimated at €0.06 per kilo. Adding in previous True Cost calculations for the hidden cost impact on soil, climate and water of organic versus conventional, organic apples have a positive financial advantage of €0.20 per kilo compared with production that uses agrochemicals.

Eosta – with EY and other partners – will announce the preliminary findings of the initiative at the Bio-fach 2017 organic food show in Nuremberg, Germany on February 16, and will for the first time include True Cost Accounting data on health. Featuring contributors from Eosta, EY and two for-mer German government ministers, two seminars² at Biofach will look at True Cost Accounting in finance, food and farming and examine how the concept can work in practice.

Intensive farming – from monoculture to the large-scale use of pesticides – has led to a depletion of natural capital, while current production methods continue to damage social capital, ie the welfare of communities. In fact, the UN Food and Agriculture Organisation (FAO) estimates that the hidden negative impact of food production on natural and social capital amounts to €5 trillion per year. However, despite companies who exhaust their natural and social capital effec-tively having no future, such losses are not reflected in balance sheets or profit & loss accounts.

Eosta has taken on the challenge by participating in the ‘True Cost Accounting in Finance, Food and Farming’ pilot programme. The Dutch organic specialist will become the first participant to be accounted on a company level with True Cost Accounting, up to and including the balance sheet and profit & loss account. The initiative follows the launch of Eosta’s True Cost of Food campaign³ in 2016, which is focused on increasing awareness of the real, hidden cost of food production, in the process emonstrating that rather than organic being too expensive, conventional is too cheap.

With the ‘True Cost Accounting in Finance, Food and Farming’ pilot programme, Eosta, Triodos Bank and EY are aiming to show the real cost of food production in financial terms, and outline why such figures have to be featured in balance sheets.

Eosta CEO Volkert Engelsman said: “Thanks to the fantastic work of UN departments such as FAO, but also WHO, UNEP and UNDP, we have access to monetisation templates that help not only de-fine the impact of food production on soil fertility, climate change, water quality, biodiversity and livelihoods, but also monetise the impact.

“We’ve done that work on a farming and food level, and we will now move ahead and apply it to our balance sheets and profit & loss accounts, meaning as well as reporting to financial stakehold-ers, we will also report to natural and social capital stakeholders.

“As a small to medium-sized enterprise, we can move fast, but what we want to avoid is that this initiative dies in splendid isolation – we want it to be scaled up, which is why we have embedded it in the context of the Natural Capital Coalition’s Natural Capital Protocol⁴.

“We hope to combine the change leadership power of small to medium-sized enterprises and banks, like Eosta and Triodos, with those players who have the ability to scale up the initiative once the first results have been delivered.”

farming. How the concept can work in practice. https://www.biofach.de/en/events/vortrag/true-cost-accounting-in-finance...

3. The Natural Capital Coalition (NCC) was founded in 2012 with the goal of readdressing the bal-ance by helping companies maintain or improve capital. Participants include Whole Foods, EY, FAO and the World Business Council for Sustainable Development which counts Nestlé, Unile-ver, Heinz and Cargill among its members.