True Cost of Food now in stores all over Europe 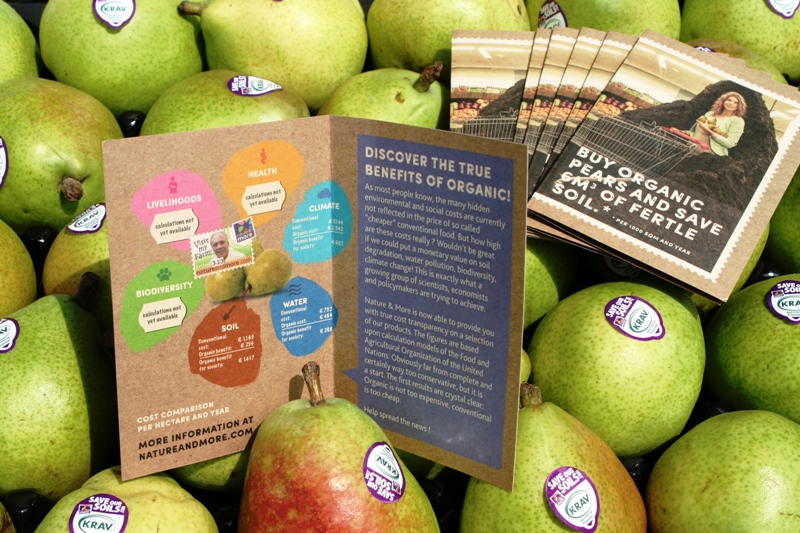 Organics specialist Nature & More has teamed up with a number of customers to make real cost of conventional fruit and vegetables visible to European consumers. The pioneering project has now been launched by retailers and health food stores in Sweden (Fruktbudet), Germany (Alnatura, Denn's), Netherlands (Ekoplaza), Finland (SOK) and will be later this season in Denmark (Arstiden, DANSK) and other countries.

Nature & More argues that much of the fruits and vegetables currently available in the UK and EU are sold far too cheaply and conceal negative environmental and social impacts. Consulting firms write hefty social impact reports for companies, but the actual hidden costs at product level are not shared with consumers.
That was, until now: Nature & More’s project, in cooperation with organic retail partners, aims to convince consumers that organic food is not too expensive, but rather that conventional food is too cheap.

Beginning last May and depending on availability, pears, pineapples, oranges and lemons in supermarkets across Europe are for the first time displaying information cards that show the true price of food. In the UK, these cards will be included with organic Nature & More pears, lemons, oranges and pineapple supplied by wholesaler Langridge.

The cards show a flower whose six petals illustrate the monetary costs to the climate, water, soil, biodiversity, social cohesion and health of conventional fruits and vegetables. For direct comparison, the cards also display the substantially lower ‘true’ costs of production for organic fresh produce from the same region.

Nature & More CEO Volkert Engelsman said: "The importance of this information is considerable because we are not currently getting an accurate picture of the actual cost of food production.”

Taking the example of pear production in Argentina (supplier of substantial volumes of organic pears to the EU), Engelsman said: "Consider the climate costs – artificial fertilizer and pesticides are used in their cultivation. These are made with fossil fuels which lead to carbon dioxide emissions. At the same time, farmers are not required to compost to keep the soil fertile, so less carbon dioxide is stored in the soil."

Hidden costs
Such effects can now be calculated in terms of costs. In 2014, the UN’s Food and Agriculture Organisation developed a method to calculate the hidden costs of food production. Results from the investigation were included in a table from which the costs of water use, water pollution and greenhouse gas emissions, among other factors, could be calculated.

Using this method, Nature & More has calculated that the hidden climate change-linked costs of an acre of a non-organic pears in Argentina amounted to £987 per year. The hidden costs related to water pollution and soil erosion were estimated at £236 and £365 per acre respectively. Taxpayers ultimately have to pay the costs that governments incur for water purification and irrigation water subsidies or those costs get pushed into the future when subsequent generations will have to pay for them – with interest.

Nature & More has also calculated the true costs for pears produced by its organic grower Hugo Sanchez in Argentina’s Rio Negro Valley. In total, Nature & More’s organic pears delivered a social advantage of at least £718 per acre of orchard, with costs for biodiversity, health and social effects not even included in this figure. Per kilo, Nature & More’s organic pears delivered an advantage of at least 4.4p per kilo despite a 17% lower production per acre.

Engelsman added: "The numbers prove our point: organic food is not to expensive, conventional food is too cheap!"

Nature & More parent company Eosta supplies certified organic produce to wholesalers and retailers in the UK and across Europe, as well as organic greenhouse crops to the USA and the Far East. Eosta products carry a unique three digit code that provides consumers with direct web access to detailed information about the producer and his ecological and social impact, under the "trace and tell" trademark Nature & More. For more info about the True Cost of Food campaign, see www.natureandmore.com.

True Cost of Food now in stores all over Europe