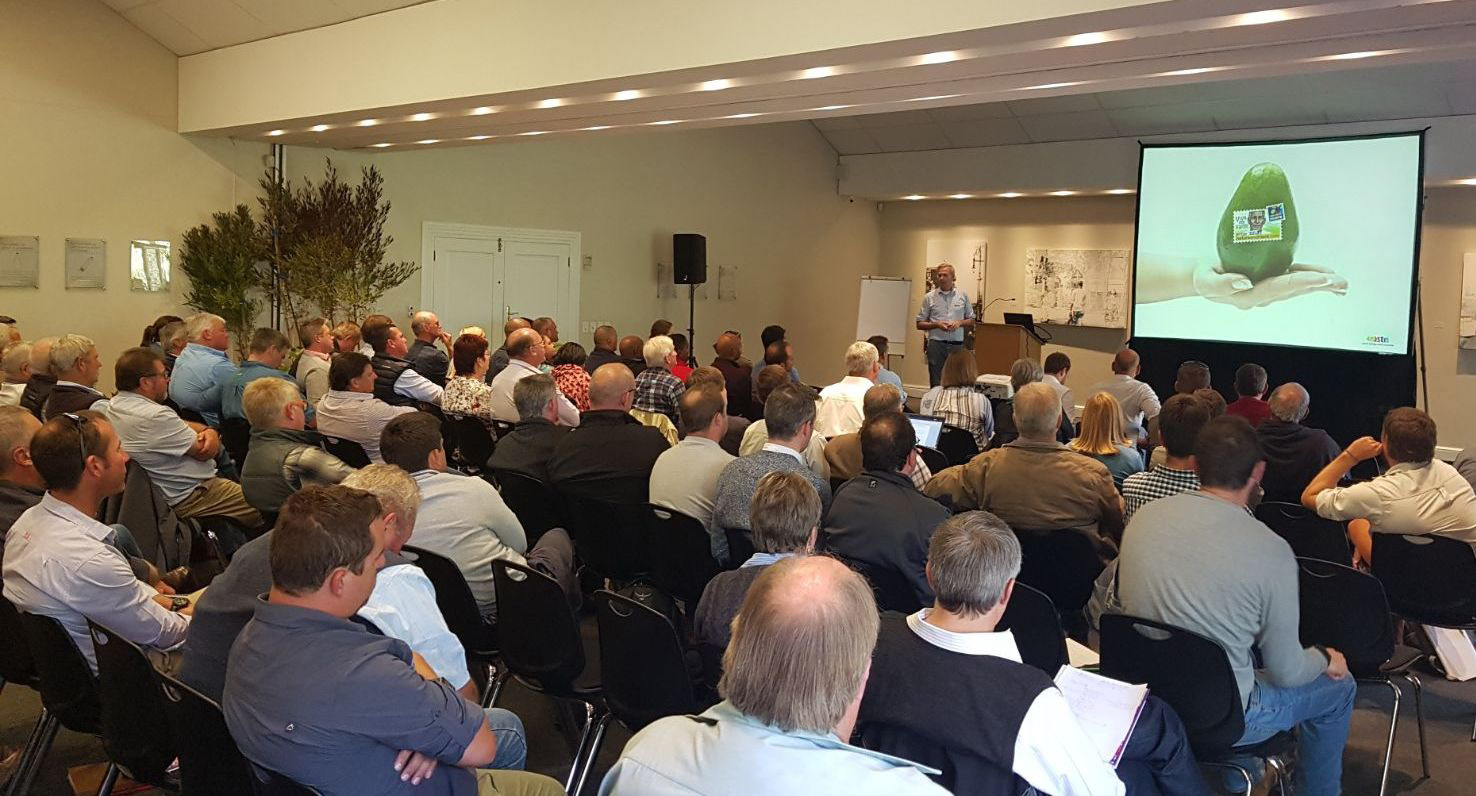 South Africa has approximately 650 table grape producers, almost all of which are conventional growers. More than 150 of them, or 20%, attended a conference on May 10th on the opportunities for organic grape cultivation in South Africa. The conference, held in Stellenbosch, was organized by Eosta, a leading European importer and distributor of organic fruit and vegetables. ‘With conventional cultivation you are increasingly running into problems,’ said grape grower Easton Marsh from Lushof. ‘Annual droughts are becoming extreme, and public resistance to pesticides is growing. Organic cultivation can offer some solutions.‘

Eosta presented the Capitalizing on Sustainability Congress to inform conventional grape growers about the economic and ecological possibilities of organic cultivation. ‘Since Jan van Riebeeck built the first vegetable and fruit gardens on the Cape, this country has always been a leader in agriculture’, says Volkert Engelsman, CEO of Eosta. ‘But in recent years, South Africa has fallen behind in terms of sustainability. The share of organic in South Africa is now 0.05% of the area. That is a missed opportunity, really.‘

Shortage of supply
The run-up to the congress was bigger than expected, says Engelsman. ‘We had hoped for thirty attendees, but the registrations started coming in immediately and kept coming. We seem to have hit a nerve. This is really a trend shift.’ According to Engelsman, the organic market can accommodate newcomers. ‘The total turnover of organic grapes in Europe increases by double digits each year, and there is a shortage of supply. We work with four fantastic growers, but there is room for more. We will be happy to advise and assist growers who want to convert to organic.’

New grape varieties
One of the barriers to converting to organic cultivation is that various conventional grape varieties are not suitable for organic cultivation. Varieties such as Thompson Seedless for instance require continuous chemical adjustment: to trigger bud break, to influence berry size, to thin the bunch, to obtain good colouring. . Breeding companies SNFL and Sun World, however, presented new grape varieties at the conference that were specially developed for organic farming. Organic grower Warren Bam spoke enthusiastically about Allison, a new variety introduced by SNFL: ‘Nature does most of the work with this variety, as it should. As a grower, my most important task is to ensure a healthy, living soil.’

A solution for droughts
The increasing droughts are another reason for growers to consider converting to organic methods . This year the Western Cape suffered from a drought that threatened to exhaust the total water supply of Cape Town. The grape harvest fell by 15%, and most growers have used up their water reserves. Eddie Redelinghuys, a pioneer of organic grape cultivation since 1997, still has enough water left for next year. He told the congress how organic cultivation helps him cope with water shortages. ‘Using conventional cultivation, the soil withers and can no longer retain moisture. As an organic grower I work with compost instead of artificial fertilizer. As a result the water-retaining capacity is much higher; one can save up to 60% of the water. If the entire Western Cape would farm organically, we would save at least 22 billion litres of water per year.’

Soil is the secret
Tobias Bandel of consultancy firm Soil & More Impacts, which advises farmers who want to go organic, pointed out that a living soil has many other advantages too. ‘By taking care of the living soil, you solve the root of the problem. The plant has much better resistance to plagues and diseases. Moreover, you store carbon in the soil, which is a positive contribution to the climate problem.’

At the end of the conference, various attendees indicated that they had a serious interest in converting to organic. South African growers who did not attend the conference but who are interested in conversion may contact Pieter de Keijzer, product manager grapes, at Eosta: Pieter.de.Keijzer@eosta.com, +31 6 410 023 20.

Eosta is the leading European importer and distributor of organic fruits and vegetables under its flagship brand Nature & More. They have initiated numerous sustainability campaigns and innovations in recent years. In 2017, CEO Volkert Engelsman was awarded top place in the annual Dutch Sustainability Top 100 list. Eosta has also received international press coverage for its Natural Branding technique, which involves marking organic fruits and vegetables with laser technology in order to reduce use of plastic packaging. See: www.natureandmore.com.