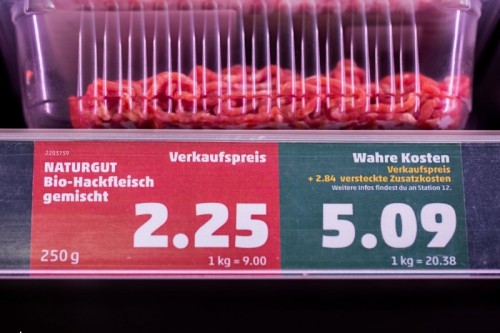 An international coalition including Eosta, Beyond Meat, Proveg International and SMMI (Sweden) has created a campaign to call on the heads of government in fifty countries to introduce a meat tax. These countries should then devote the revenue generated to making vegetable-based nutrition cheaper and supporting farmers. Scientists have calculated that the benefits for public health and the climate would amount to billions of Euros. The copious consumption of meat and dairy products now causes a multitude of problems – almost 60% of the annual loss of biodiversity and 15 to 20% of global greenhouse gas emissions. The campaign is coordinated by TAPP-coalition in the Netherlands, Eosta being one of the founders.

The ‘Carbon Pricing for Food’ (hashtag: #futurefoodprice) campaign calls on the fifty countries with the highest meat consumption in the world to introduce a carbon tax on meat and dairy products. Meat consumption entails a host of hidden costs for health and the environment. A meat tax based on True Cost Accounting will produce more realistic pricing and reduce meat consumption. Scientists at the EAT-Lancet Commission have calculated that consuming 300 grams of meat per week (16 kg per year) would be optimum for public health and the climate. The countries on the list average approximately 78 kilograms per person per year, with outliers to 124 (USA) and 137 (Hong Kong). The United Kingdom averages 80 kg per person per year, Sweden 77 kg, The Netherlands 76 kg, Germany 88 kg, Belgium 66 kg and France 83 kg. Approximately forty countries around the world remain under 16 kg per year.

The copious consumption of meat and dairy products causes a multitude of problems – almost 60% of the annual loss of biodiversity and 15 to 20% of global greenhouse gas emissions. Introducing a meat tax would lead to a price rise of 2 to 4 Euros per kilogram of meat in rich countries. This money can be used to make vegetable-based food cheaper, reward farmers for CO2 reduction, provide compensation for people with low incomes and support for poor countries. Studies have revealed that the majority of the public supports a carbon tax on meat on condition that the revenue is returned to the public and farmers. Scientists in Oxford calculated that introducing a carbon tax on meat and dairy products would reduce healthcare costs in Europe by 9 billion Euros. A tax on meat in 28 EU countries would reduce CO2 emissions by 120 million tons per year.

In concrete terms, the ‘Carbon Pricing for Food’ (hashtag: #futurefoodprice) campaign will send an open letter to fifty presidents and ministers well in advance of the UN Climate Change Conference on 1 November 2021. Organisations and companies that support the idea of the campaign are kindly invited to sign the letter. To do this they can contact and send their logo to the TAPP Coalition in Amsterdam, info[at]tappcoalitie.nl. The open letter has now been signed by organisations in the Netherlands, Poland, the United Kingdom, the United States, Latin America and Switzerland. Will your sustainable organisation be joining them?

The campaign page of ‘Carbon Pricing for Food’, the draft letter to heads of state and a media kit can be found at  http://futurefoodprice.org.

About the TAPP coalition

The Amsterdam-based True Animal Protein Price Coalition (TAPP Coalition) was founded in 2018 to increase the sustainability of the consumption and production of proteins in the Netherlands and Europe by introducing fair pricing that includes environmental costs. See also www.tappcoalitie.nl and www.futurefoodprice.org.

Eosta, with its Nature & More consumer brand and transparency and traceability system, is Europe’s most award-winning distributor of organic fruit and vegetables and is located near Rotterdam, the Netherlands. Eosta was the first company to actively support the TAPP coalition. See also www.eosta.com and www.natureandmore.com.