Interview with Volkert Engelsman in the FoodAgri Business Magazine

Sustainable growers may profit from a bonus/malus system ​​ 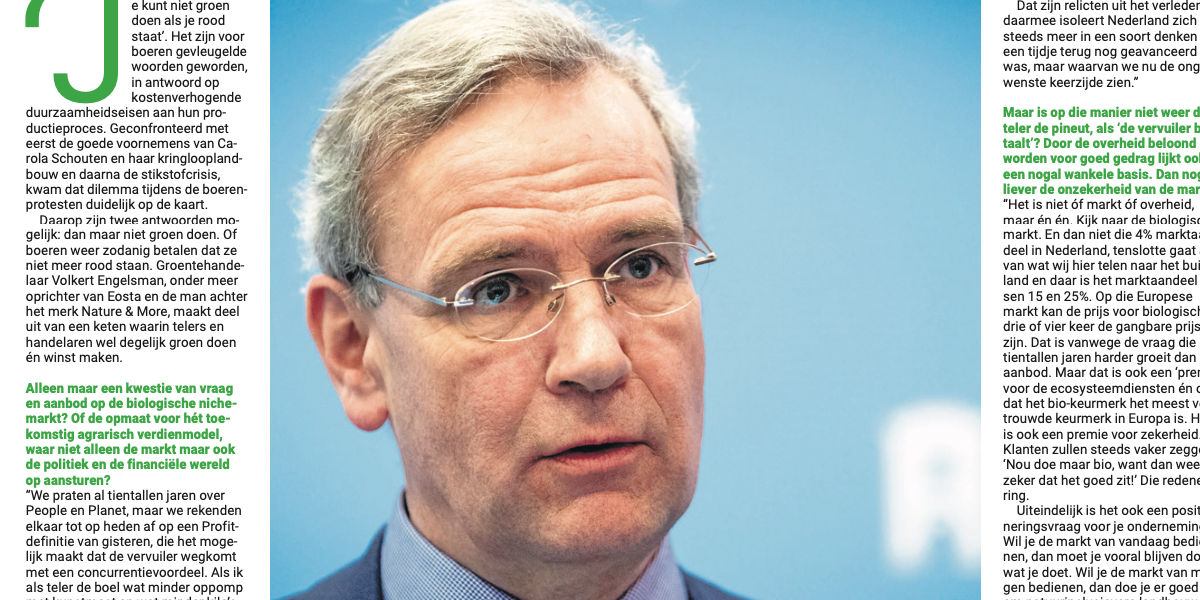 Volkert Engelsman refers to himself as ‘just a simple greengrocer from Waddinxveen’, with one vital distinction: an organic greengrocer. He is also the person who last year had a wonderful new business premises built. It just goes to show that one can actually be green without being in the red.

‘It’s impossible to be green if you are in the red’. These words are often quoted by farmers as a response to the cost-increasing demands for sustainability in their production processes. Confronted with the good intentions of Carola Schouten – the Dutch Minister of Agriculture, Nature and Food Quality – and her circular agriculture followed by the nitrogen crisis, this dilemma was clearly expressed during the farmers’ protests. Two possible answers can be given: give up being green or pay farmers enough to keep them out of the red.

Being green while making a profit

Vegetable trader Volkert Engelsman, founder of Eosta (a trading company in organic fruit and vegetables), is a member of a chain in which growers and traders do green business while at the same time making a profit. Is it simply a matter of supply and demand on the organic niche market? Or rather the prelude to the ultimate future agrarian revenue model which both the market as well as the political and financial world are striving for?

‘We have been discussing People and Planet for years on end, but until now we have judged each other on yesterday’s definition of Profit, which allows polluters to get away with a competitive advantage. If, as a grower, I use less artificial fertiliser to inflate crops, produce a little less per square metre and devote some more attention to green services, I will certainly leave behind a better planet. Nonetheless, the reaction of the bank has always been: what is this about?’

According to Engelsman, however, things are slowly changing. Boosted by the Bank of the Netherlands, banks are increasingly including sustainability indicators in their Rarocs: Risk-Adjusted Return On Capital. ‘Companies are financially assessed as usual, while in addition they are subjected to a climate stress test, a biodiversity stress test and a health stress test. And your ‘footprint’ in these areas is deducted from your profit or company valuation. These are also the new criteria by credit rating agencies. Behind the scenes, Standard & Poor’s, Moody’s and Fitch are all involved in the devaluation of companies that are still clinging too much to how things used to be.’

In recent years, Eosta has functioned as a pioneer in the area of True Cost Accounting. How so?

‘As indicated by the FAO, the UN Food and Agriculture Organisation, the Natural and Social Capital Coalition and the World Business Coalition for Sustainable Development, chaired in those days by Unilever top man Paul Polman, the world’s four main accountancy firms developed protocols to calculate externalised social costs: the costs of soil degradation, climate damage, the costs involved to clean water, restore biodiversity, and other issues. At Eosta, we have started mapping these costs for all of our products.

Today’s companies such as Unilever, Nestlé and Rabobank would be ‘too big to fail’. They have invested tens of billions of euros in the old economy and, as such, are not keen to be at the forefront. We were small enough to surge forward, and large enough to be taken seriously. We are now being applauded by people such as Klaas Knot (President of the Bank of the Netherlands), Carola Schouten and Queen Maxima. But actually these large consortia should be credited for this.’

This does not sound like something for farmers and growers to pay their energy bill or groceries.

‘True Cost Accounting demonstrates how growers are rewarded by doing what is beneficial for the planet, while at the same time earning a living for themselves as well as their children. It is also the basic principle of a new fiscal bonus/malus system in which polluters pay and those who contribute to soil fertility, clean water and biodiversity are rewarded. This is not a revenue model for main fertiliser or agrochemical input suppliers, but instead for farmers and market gardeners.’

Aren’t we giving away our power – producing as much as possible per hectare at the lowest possible cost – by doing that?

‘You are right, this is exactly the direction that has been pointed out to farmers and market gardeners over the last 75 years. The triangle of politics, science and agribusiness has proven to be an exceptionally successful revolving door and revenue model; with amazing combinations. Take Aalt Dijkhuizen, who presents himself as the spokesman of the Farmers Defence Force. Without blinking an eye, this former top manager of Wageningen UR and relic from the past stated that we don’t need bees and that fattened chickens will feed the world because of their small footprint. The Netherlands will thus increasingly isolate itself in a thinking mode that may have been advanced a while back, but of which we are increasingly seeing the undesirable downside.’

But won’t growers be scapegoated again if ‘the polluter pays’? One might prefer an uncertain market to the unsound basis of a government giving a reward for good behaviour.

‘It is not a question of either the market or the government, but both. Consider the organic market. And I don’t refer to the 4% market share in the Netherlands, because 80% of what we grow here is exported to countries that do have a market share between 15 and 25%. At the European market, the price for organic products may easily be three or four times the going price. This is caused by demand that for decades has been increasing faster than supply. But that is also a ‘premium’ for ecosystem services and because the organic quality symbol is the highest quality mark in Europe. In addition, it functions as a premium for security, and you will increasingly see customers choosing organic produce, because they will be convinced of its quality. This is how they reason.

Ultimately, this is a positioning issue for your business as well. If you are focusing on serving today’s market, be sure to keep doing what you’re doing. But if you are focused on serving the future market, you would do well by exploring nature-inclusive farming systems.’

But growers will not yet earn a living providing green services.

‘Well, in fact they won’t earn a living without them either. If you divide the gross added-value of our highly commended agricultural exports by the number of people working in those chains here in the Netherlands, i.e. the number of mouths to be fed, you will arrive at one third of an average income. So the old system doesn’t pay enough to keep the body and soul together either. Farmers and market gardeners who complain that they are not receiving a fair price for their efforts are certainly correct, and we have to move on to a system that works and calculates better.’

How quickly can money be earned from ecosystem services?

‘Really fast. The new European Green Deal is forging ahead, banks and investors are increasingly focusing on making greener investments and you really don’t have to be a clairvoyant to see that even the Dutch Prime Minister Rutte is expecting to govern in a left-leaning and green political arena after the elections. Even the CDA, the traditional pro-farmer political party has embraced the bonus/malus idea by the TAPP Coalition, in which a VAT reduction for vegetables and fruit is financed from a meat tax.’

Could this be an organic greengrocer feathering his nest?

‘Ah, good one! We are really simply doing what we have been doing for years: capitalising on maximum transparency of our products and focusing on a positive impact on health, social inclusiveness and sustainability. In conjunction with the UN, we are currently prototyping Living Wage models to improve both the incomes of farmers as well as of their employees. The difference between organic mangoes with or without fair wages for farmer and employee is about 40 cents per kilo. Together with the Ekoplaza organic supermarkets, we are conducting the Dr. Goodfood campaign which targets the proactive health effects of fruit and vegetables by applying large floor stickers, saying ‘The line of greatest resistance’.

By applying our True Cost Accounting information campaigns on the shop floor, we try to inform people that it’s not sustainable products that are too expensive, but instead that unsustainable products are too cheap. The mainstream supermarkets in the Netherlands still refuse to commit themselves, but various Rewe, Carrefour and Sainsbury’s flagship stores are experimenting with consumer information about actual costs. This seems to have finally clicked in the rest of Europe.’

Interview with Volkert Engelsman in the FoodAgri Business Magazine