Opinion piece by Paul Polman and Volkert Engelsman: sustainability is enforced through taxes

* The breakthrough of a new sustainable paradigm can no longer be denied, therefore we need a new tax system * 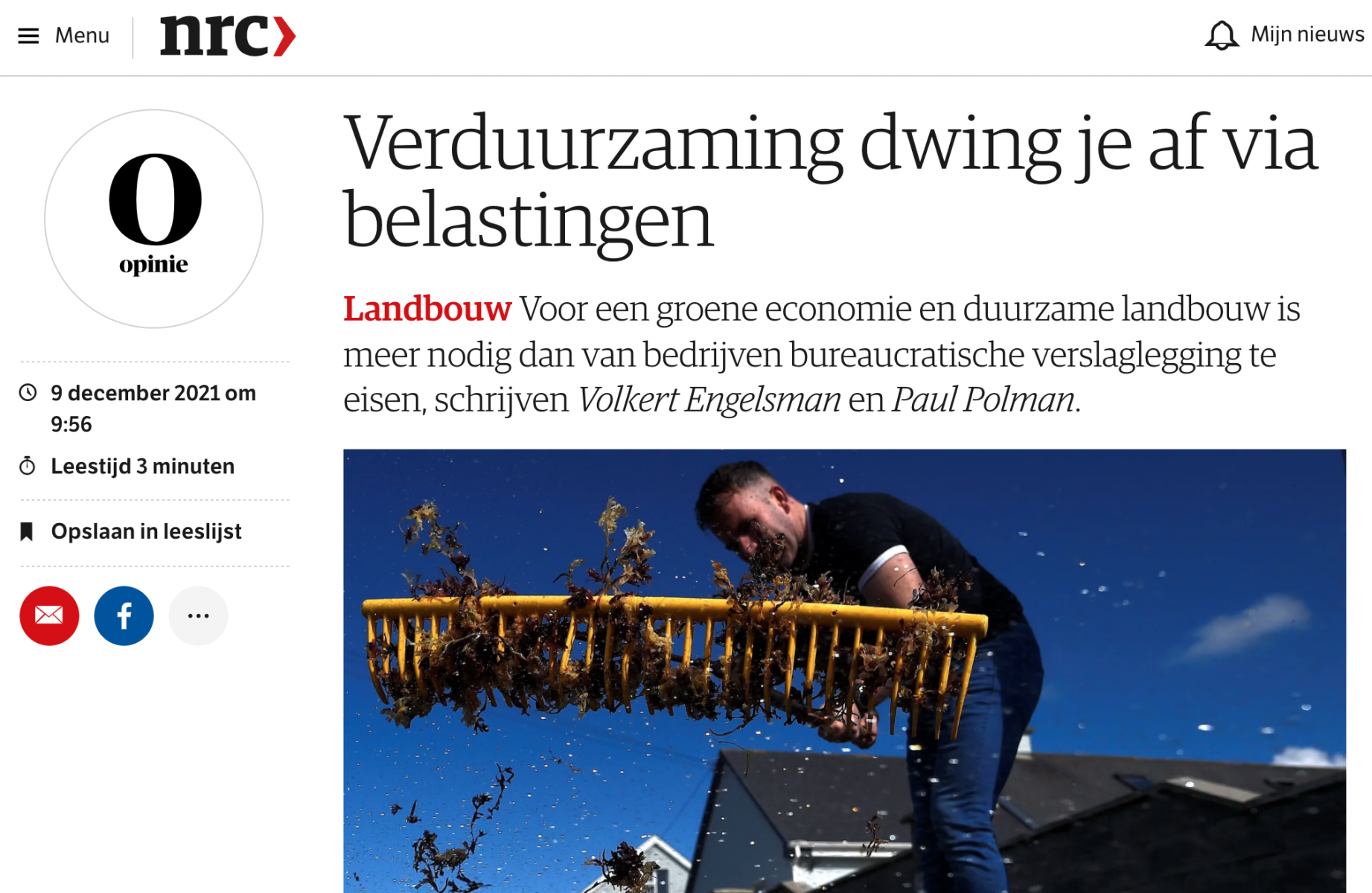 On 9 december Dutch daily NRC published an opinion piece by Paul Polman, author of "Net positive: how courageous companies thrive by giving more than they take" and previously CEO of Unilever, and Volkert Engelsman, CEO of Eosta. They argue that the breakthrough of a new sustainable paradigm in agriculture and the economy can no longer be denied. They therefore advocate a revision of the financial system, specifically the tax system. Governance regulations and reporting demands are not enough to motivate companies intrinsically, moreover they carry the risk hat only the very largest companies can find their way to the European agricultural billions.

Sustainability is enforced through taxes

Volkert Engelsman and Paul Polman argue that a green economy and sustainable agriculture require more than bureaucratic reporting from companies.

At the end of November, the European Parliament voted definitively on the expenditure of 387 billion euros in European agricultural funding. The outcome is that, from now on, 25 per cent of payments to farmers must be spent on climate-friendly agriculture. Traditional Dtuch pro-farming parties like the Christian Democratic Appeal (CDA) and the Reformed Political Party (SGP) are satisfied. These parties were still in a state of panic in October when the European Parliament voted overwhelmingly in favour of the European Commission's Farm to Fork strategy. That was a shock, because the strategy involves: a 50 per cent reduction in pesticide use, a 20 per cent reduction in the use of artificial fertilisers and at least 25 per cent organic farming, all by 2030. CDA, SGP, farmers’ organisations and Wageningen University & Research complained vociferously about how impossible that would be. The new round of EU-voting on the agricultural budget appears to have reassured the traditional pro-farming parties that it won’t come to that.

This, of course, is a big mistake. The European Union’s change of course on agriculture is nothing less than the breakthrough of a new paradigm, not just in agriculture, but across the whole breadth of the economy, and all over the world. The signs are mounting. Shell has been ordered by the court to reduce its emissions and is sitting on a growing bubble of stranded assets. At the Glasgow climate summit, the Netherlands succumbed to peer pressure to stop investing in foreign fossil fuels. True Cost Accounting, putting a price on a company’s environmental impact, is gaining ground throughout the financial sector. And even the agricultural sector is realising that ensuring the survival of humanity and the planet is more important than maximising production.

It is not only the EU that wants more sustainable agriculture: one of the initiatives launched in Glasgow is the Regen10 project, which aims to achieve 50 per cent regenerative agriculture by 2030. The project is supported by the International Union for Conservation of Nature, the World Business Council for Sustainable Development and other influential parties. Those who continue to ignore the Parkinson’s disease epidemic among farmers and the nitrogen problem (which is actually an artificial fertiliser and imported feed problem) are out of touch with international reality.

The tide can no longer be turned. The Friedman doctrine no longer holds true: companies now have a social responsibility that goes beyond making profits for shareholders. Once you have seen how the economy is undermining itself, you can no longer ‘unsee’ it. The need to work more sustainably has become existential.

How are we going to create this new economy? There is all kinds of legislation in the making in Europe that will require companies to report on sustainability. The European Corporate Sustainability Reporting Directive was adopted last year along with the new EU Taxonomy, a classification system of economic activities that the EU considers sustainable or climate-friendly. The EU Taxonomy is intended to be a guideline for investment funds, but may also be used to determine where agricultural investments and subsidies are used.

The focus on such reporting and classification systems is understandable and necessary, but there is also a danger: you cannot force companies to actually become more sustainable by imposing reporting obligations. We are in danger of heading for an endless bureaucracy of sustainability, in which only the biggest companies are able to find their way to the European billions. Real change is not imposed, but comes from within. Real innovation comes from a small, trendsetting minority. You don’t want these change makers to be nipped in the bud by a bureaucracy designed for dinosaurs. It is telling that only 10 per cent of the new EU agricultural budget is set aside for small and medium-sized enterprises, while 90 per cent will continue to go to agrochemical giants.

This simply is not enough. If you want to make a car more sustainable, there is no point in just increasing the requirements for the driver; you have to do something about the engine as well. The government needs to take practical financial measures that will actually make business processes more sustainable. This certainly applies to agriculture. Tax measures are needed to steer the sustainable transition in the right direction.

Fortunately, there is some movement already: calls for lower VAT on fruit and vegetables are growing louder in Europe and this has already been partially implemented in Germany. And support for a meat tax, a sugar tax or a universal CO2 tax is voiced regularly.

But it’s about the whole package. Basically, there are three aspects in which the economy needs to be thoroughly revised: the ecological breakdown, the wealth gap and the health crisis. This will require a review of the tax system across the board, shifting from value-added tax to tax on the use of natural resources. This forces sustainability and stimulates employment. Eckart Wintzen’s Ex’tax project gives an impetus to this, for example.

Now that Europe has decided, it is up to the countries themselves. It’s time for the Netherlands to embrace the new normal. Strong promises were made at the Glasgow climate summit: that we will do everything we can to keep the average global temperature rise to less than 1.5 degrees. Now we need to make sure we don’t get bogged down by bureaucracy, but must instead switch to taking action as soon as possible. This includes strong fiscal signals that level the market’s playing field between sustainable and non-sustainable producers.

Volkert Engelsman is the CEO of Eosta.

Paul Polman is a co-founder of Imagine and former CEO of Unilever. He is also the author of "Net positive: how courageous companies thrive by giving more than they take".

Opinion piece by Paul Polman and Volkert Engelsman: sustainability is enforced through taxes